Wild at Heart: The Nightmare of a Dream Come True

One of David Lynch's central thematic concerns is the way our dreams and fantasies influence our perception of the reality around us. He has explored this most explicitly in Mulholland Drive and Lost Highway, each of which presents us with two entirely different versions of reality. Like in The Wizard of Oz, Lynch shows us (objective) reality and the character's (subjective) vision of it, and the thematic development comes from the contrast between the two. Wild at Heart continues to develop this theme in a slightly different way: by showing what happens when characters get stuck in their fantasy world. It is Oz without Kansas.

Sailor (Nicolas Cage) and Lula (Laura Dern) are two lovers who go on a road trip to escape various repressive aspects of their lives (prison/parole for Sailor; family/mother for Lula). The closest Wild at Heart gets to its presentation of objective reality (i.e. Kansas) is in its prologue, where Sailor kills a man who assaulted him with a knife. The characters in this scene will reappear elsewhere, and these events will be returned to in flashback (although importantly from the point of view of other characters, with its objectivity removed), but this is the only time we will see the world Sailor and Lula are trying to escape from.

The film's use of the tropes of the road film genre are no coincidence: these journeys away from the restrictions of society always contain an element of fantasy, usually for another time (return to the past) or another place (return to nature)—a fantasy which often finds itself broken or empty by the end of the journey (e.g. Easy Rider). Likewise, Sailor and Lula initially leave their homes in order to escape into their fantasies and let their enjoyment of each other run free of the respective restrictions of family and society. But eventually, this life of pure enjoyment catches up with them and they begin to get too close to the truth of their desires.

Initially the couple's enjoyment of each other and of their rebellious journey is so intense that it seems to jump off the screen. Nicolas Cage is an actor known for his outrageous and bombastic performances, and here he is in fine form doing a loud, immoderate, Elvis-like hard rocker. Lynch uses vibrant colors (particularly red) and lingers in the middle of dissolves with two images overlapping each other, the excessive visual complement to Sailor and Lula's excessive emotions (similar to what Sirk does with melodrama). 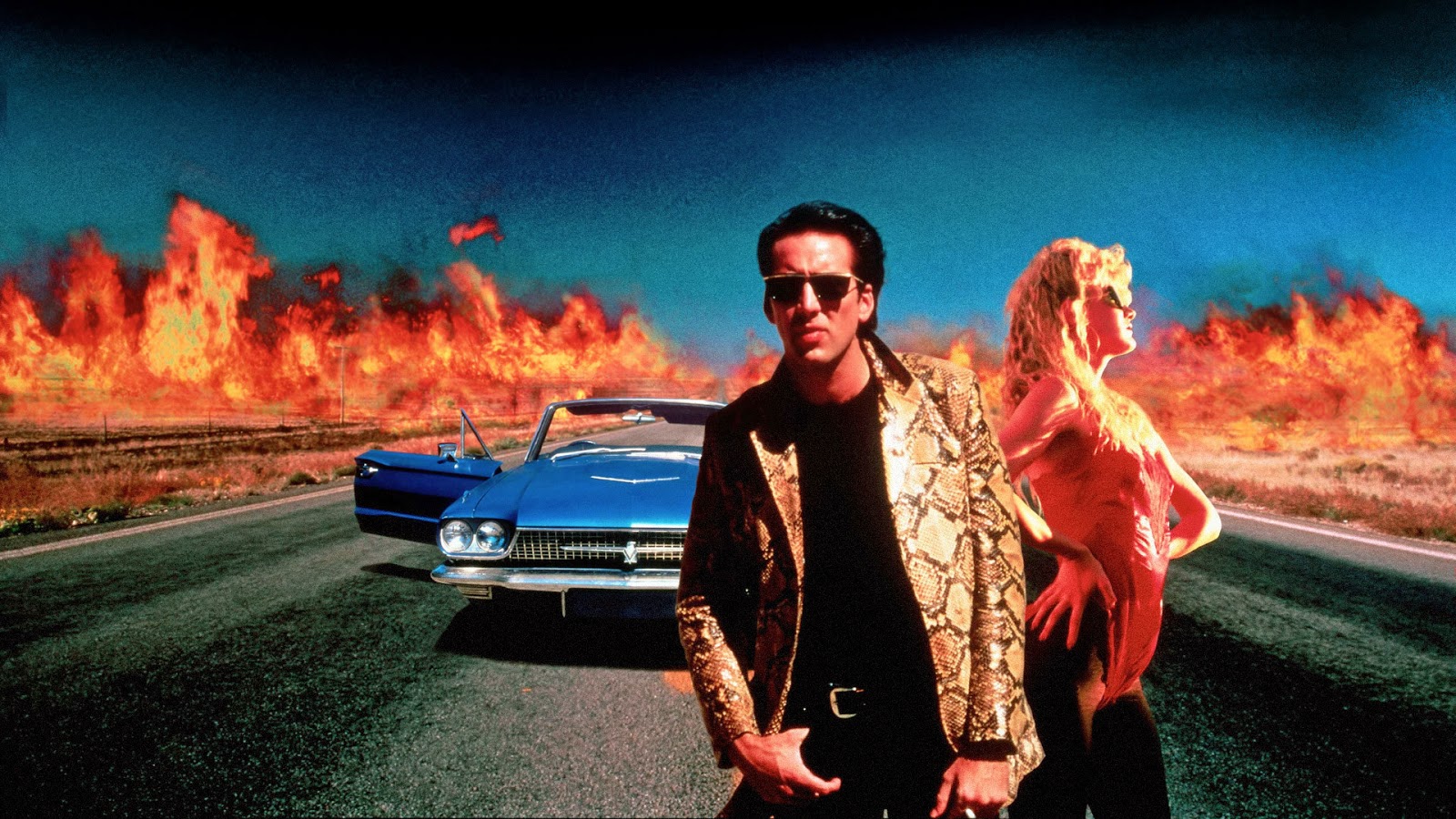 But as with too much of any good thing, their passion begins to fade. The flaming red montages take on a cooler blue palette. The couple stumbles across a car crash and witness the death of one of its victims, and Lula begins to feel the presence of a bad omen. Without the reality of polite society for them to run away from, the world of their fantasy on the road comes unhinged.

This chaos reaches its climax when the infinitely creepy Bobby Peru (Willem Dafoe) forced Lula to ask him to have sex with her. This psychological rape is the horrific inverse of Lula's fantasy: she ran away in order to escape into her sexual fantasies, and now she's being forced into someone else's. She clicks her heels but can't return home. Likewise, Sailor's fantasy of an escape from society reaches its inverted apex when he's forced by Peru to become a robber, risking his life in order to stay alive in this dangerous world.

In Wild at Heart, Lynch depicts the duality of our fantasies: when we get what we want, it turns into something else, something more sinister. Outside of reality, only our unconscious is left holding the reigns, and when we get stuck in our dreams they turn into nightmares.