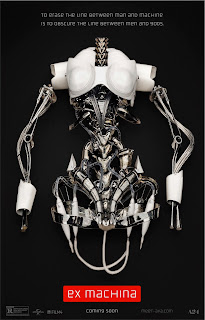 While Ex Machina opens on the eyes of Domhnall Gleeson's aspiring programmer as he wins a trip to join tech genius Oscar Isaac on his reclusive estate and test out his new artificially intelligent robot Alicia Vikander, the strength of the narrative rests in its ability to be seen through the perspective of any of its three central characters. Gleeson's Caleb is the obvious audience surrogate, but the characters are all strong enough to support their own points of view, and by the end of the story I found myself gravitating most toward Vikander's Ava.

In fact, the most telling detail of the film's production is writer/director Alex Garland's statement that he wrote the script from Ava's perspective. Not only is her performance impressively subtle (particularly for something which could be as gimmicky as a human pretending to be a robot pretending to be a human), she also strikes me as the most sympathetic character—ironic, considering she's the only one of the three who isn't human.

Science fiction is a genre which has always used aliens, robots, and other inhuman creatures to explore the nature of humanity, and Ex Machina turns this trend on its head. Rather than using Ava as a contrast for the humanity around her (the evil invader cliche) or making her the naive outsider who has to learn what it means to be human (The Day the Earth Stood Still), she's used as a contrast to show the inhumanity of her creator(s). She shows us that the humans in the story are actually the least human—depending, of course, on what you mean by "human". She is the most sympathetic in the sense that her apparent innocence and eventual drive for independence are traits we value; but maybe Nathan's ambition to keep pushing boundaries is actually more human, even if it's not necessarily more desirable.

Nathan knows before the movie begins that he has created artificial intelligence. He tells Caleb that Ava would certainly pass a traditional Turing test (in which he could only hear her voice). He has already opened this can of worms before Caleb even arrived and is now playing around with its contents--and much more importantly, he's not letting the worms outside of his grasp. He explains to Caleb that his estate has no windows because it's like a laboratory, but the more accurate comparison would be to a prison. The primary mood of the film while Caleb is alone in his room is one of claustrophobic paranoia, and this fear of entrapment is realized when Caleb eventually gets locked in his room.

Nathan's need for control is more insidious than simple scientific rigor. Beyond the idea of artificial intelligence, Ex Machina is also concerned with having a dialogue about sexuality, and the robots Nathan has created are not only female but also overtly sexualized. While the primary text is an examination of man vs machine, the primary subtext is one of man vs woman. This frat house playboy of a character seems more interested in drinking and having sex than in the scientific details of the incredible technology he's created, and the way he treats his machines stretches the boundaries of current notions of objectification. Sure, technically speaking these women are literally objects, but that doesn't mean they deserve to be treated that way. While Nathan exploits them for his own pleasure, the movie shows us that they are much more than their artificial limbs.

This female empowerment is also how Ex Machina sidesteps the pitfalls of traditional tech paranoia which have become increasingly commonplace ever since Hal refused to open the pod bay doors for Dave. The reason there are so many evil artificial intelligence machines from Skynet in the Terminator franchise to this year's Ultron is that we're afraid our reliance on technology for daily life will turn against us. Ex Machina gives us a different perspective on the situation: self awareness and artificial intelligence aren't things to fear, they're the inevitable next step in our evolution. Nathan says as much to Caleb, and far from seeing this as the ramblings of a mad scientist, the movie offers it as a genuine point of view. And that's one of the things that's so magical about it: you can see the story through many different eyes, and each pair is as fully formed as any other.

A lot of reviewers have been throwing the Kubrick word around with this movie, and while I see some of the similarities (the occasionally cold atmosphere) I'm not sure the comparison totally fits. The movie wasn't quite a perfect experience for me (some of the twists and turns felt a bit contrived), but its thematic intelligence easily made up for any structural weaknesses. It is a movie which not only creates compelling characters, but also uses them to indirectly ask us what it means to be human. It asks us if we would rather be represented by people like Nathan or if creatures like the inhuman Ava are somehow more human. This is true science fiction, and I'm excited to see where Alex Garland will take his talents next.