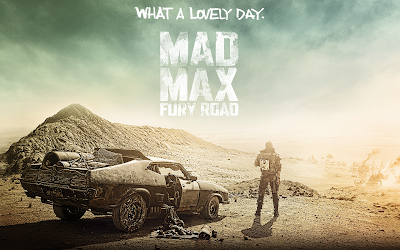 ***This article contains spoilers.*** For a spoiler-free review, check out my previous entry.

It's no secret that Fury Road is less Max's show than Furiosa's, but as much as I love her development from the reveal of the stolen brides to the reveal of the nomadic mothers, the character I can't stop thinking about is Nux. His narrative arc has the perfect three act structure in that his motivations come full circle with a slight but significant shift in perspective which signifies the central theme of the film. He begins the story desperate to sacrifice himself, and by the end of the film he accomplishes this goal, but for radically different reasons. 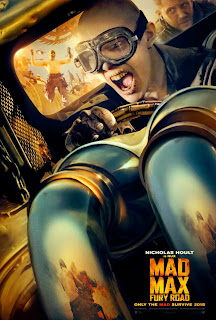 Initially, Nux sees it as his destiny to die in the glory of battle and be welcomed into Valhalla, but this is not a view of his life he came to naturally. He is a victim of Immortan Joe's insidious mythology, created in order to brainwash an army of minions for waging wars. The film is littered with religious and ritualistic symbolism: the altar of steering wheels, the cross-fingered salute, the war paint, the cries for witnesses. George Miller is constructing a religious dogma of the future in order to attack religion dogma of the present, a theme that has run throughout Miller's work all the way back to the violent motorcycle gang known as The Acolytes in the original Mad Max.

But gods are not the only entities whose worship brings trouble. In Fury Road and throughout Miller's filmography, worship of commodities is just as virulent. The Mad Max series is famous for its portrayal of a dystopia caused by wars for oil ("guzzoline"), and in Fury Road these symbols of overconsumption multiply. In additional to gasoline, people also worship water and bullets and even the cars they drive. But the most telling detail of this vision is the fact that now even humanity has turned into a commodity, an integral component in the capitalist machine. The wives are repeatedly referred to as property, and as we see children turn gears by foot we understand that late capitalism has become its own form of religious dogma. 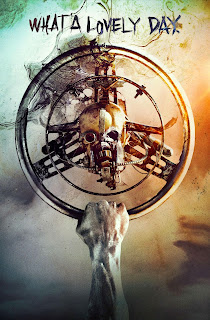 The subject of Miller's critique is not religion as such, but religious extremism. The War Boys in their suicidal drive for self sacrifice resemble nothing more than the suicide bombers of Islamic extremism. This is a world run by terrorists. But it's not only the bad guys who are driven by this type of misleading mythology: Furiosa's idea of the Green Place is just as fantasmatic as the War Boys' idea of Valhalla. Rather than showing religion itself as a demonizing influence, Miller shows that it can have its place when wielded innocently. In a much more intimate moment, we see one of the angelic wives praying to "anyone who's listening." Far from the destructive ends to which we see religious causes perverted elsewhere in the film, this is a moment which is honest, pure, and virtuous. It shows the crisis at the heart of these characters' hope and sides with them in their cry for protection.

Nux begins at the opposite end of this spectrum. He thinks the only way he can make his life meaningful is by sacrificing it to end the lives of others. Life is not inherently meaningful, and in order to earn that meaning you must sacrifice it. Life must obtain use value. Nux gradually begins to question his faith, until in the most tender moment of the film he loses it completely. Capable (the red-haired wife) finds him stowed away in the back of the war rig, where he laments his own survival and confesses that he no longer thinks his life can be meaningful. Capable reassures him, saying that instead it must have been his destiny to survive. This is the turning point for Nux, where he realizes that life can have inherent value.

From this point on, he helps Max, Furiosa, and the wives survive. He learns that life can have meaning beyond its ritualistic sacrifice or its objectivized use value. He becomes attached to Capable and to the rest of the crew. This is the ultimate message of the film: distinguishing between good and evil is as simple as distinguishing between those that see life as inherently valuable and those that do not. It is exactly this shift in perspective which characterizes Nux's narrative arc through the story. At the beginning he wants to sacrifice himself for the (misguided) selfish end of entering Valhalla; at the end he succeeds in sacrificing himself, but he does so in order to keep his friends alive. In direct opposition to Immortan Joe, who sacrifices others to sustain himself, Nux sacrifices himself in order to sustain the lives of others.