The Man from Earth: Narrative vs. Narration 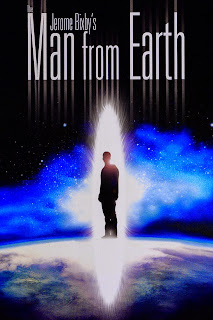 The Man from Earth is a lo-fi science fiction movie that compensates for its low budget with its high concept. It's hard to say anything about the plot without getting into spoilers (the synopsis and poster and even its genre feel a bit like spoilers, even if for plot points which are revealed fairly early on), so if you're a fan of hard sci-fi or stuff like Primer then do yourself a favor and see this before reading anything else. Written by Jerome Bixby, a contributor to both Star Trek and The Twilight Zone, it concerns a group of scholars debating the possibility of a man living from prehistoric times into the present and what he might be like today, and it all takes place in and around the house where they're meeting to say goodbye to one of their fellow professors.

The production is pulled off so successfully in spite of its monetary restrictions that regardless of whether or not it worked for me (it didn't) I wish there were more movies like this. The acting, writing, cinematography, and editing certainly aren't award-winning material, but they're all functional and only occasionally distracting. It often feels better suited to television or even the stage, but for what it wants to be it's executed well enough. Even though I ultimately didn't like the movie, its production design is exemplary and I'll only be glad to see its cult following continue to grow.

The problem for me is that the entire movie plays out on the surface. Movies are not about what they're about (plot), they're about how they're about it (theme). Show, don't tell, and The Man from Earth only knows how to tell. As high concept sci-fi, it's unsurprising how much exposition is involved in the story, but when this exposition starts functioning as the central narrative and as a tool to describe characters, my brain starts throwing up red flags. Character development is not what happens when actors read dialogue explaining who they are or what they're thinking, it's what happens when they respond to the stimuli of the narrative. In this sense, the strongest part of the film for me was two shots of John Oldman close up in the foreground with the rest of the group together in the background. These shots show John's isolation and loneliness and frustration more than any of the (many) things he says about himself. This is the only instance of "showing" I caught in the whole film.

The crucial point of comparison for me is 12 Angry Men. There we have another movie which is exclusively concerned with a group of people talking in a single room, but it succeeds because it's about more than it's about. 12 Angry Men is not a movie about whether or not a young, underprivileged, Hispanic boy killed his father, it's about how 12 men in a room decide on his fate and how they change over the course of their discussion. It's about the justice system and about human nature, and yet the development of both the characters and the themes happens in the background, under the surface, as a result of the dialogue about the case at hand. There were moments when The Man from Earth seemed interested in something more than the exposition being delivered (at one point it almost becomes about the nature of storytelling), but it always came back to this man in a room talking about himself.

The Man from Earth is a film that many science fiction fans will probably enjoy watching, but it didn't work for me, and the nature of its expository dialogue makes me doubt that there's much more for me to gain from repeat viewings. It's an interesting film both in terms of its premise and its production, and listening to the people that made the film makes it easy to see how wrong it could have gone. I'm so glad it turned out the way it did since it wouldn't have been able to build its cult following any other way, but as much as I want to love it I think one still just isn't for me.