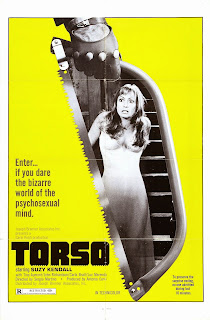 Torso is a colorful and sexy murder mystery with elements of horror which helped continue the ongoing development of the giallo in Italy and inspire the creation of the slasher in America.

It is about "torsos" not only in the sense of "there are going to be some people murdered & turned into torsos," but also (and more importantly) in the sense of objectification, seeing women as no more than their torsos. The plot sounds like it was lifted straight out of a porno (and honestly if you walk in at the right/wrong time you could easily mistake it for one): a bunch of attractive college girls run off to an isolated mansion to get away from school and have some sexy party time. But their festivities are cut short (literally) by a masked murderer with a hacksaw intent on separating these girls from their body parts.

"Poetic" may be too strong a word, but there's some symbolic sorcery involved in the metaphorical marriage between the concept of objectification on the one hand and on the other this psychotic serial killer intent on turning women (again, literally) into objects. And it's not just the fact that he kills them, it's also his methods: he cuts them down into their primary components, turning what was once a woman into arms, legs, a head, and a torso. The film combines this with female sexuality and eroticism explicitly in its opening scene, where a group of naked women are being photographed by a mysterious outside person.

Objectifying women in this sense (either turning them into limbs or photos) seeks to domesticate their bodies, to make them safe for consumption (because, as every good misogynist knows, women are inherently dangerous); but in order to do so, it must necessarily remove their subjectivity. In short: women are sexy and men want to kill them for it; but there's more to is than that. As long as they retain their identity/agency/sexuality, they have power over these threatened, weak men. This is why psycho-sexual slashers like Torso feel emancipatory to me: they're all about an impotent little man and his desperate attempts to overcome the intrusive presence of femininity. The women are the ones with the power, and the man with the saw finds himself desperate, impotent, and emasculated by their existence.