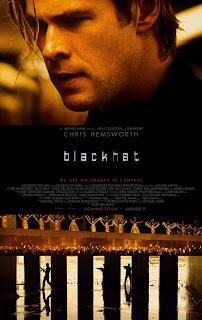 At a time when every new movie seems flooded with fear of what will happen when the machines take over, perhaps it shouldn't be surprising that an older director is the one to take the long view and realize that before we start worrying about the dangers of technology in itself we have to first examine our own ethics of how it ought to be used.

Blackhat is an idiosyncratically Mannish thriller about hackers and the role of technology in the realm of international politics. Chris Hemsworth plays Hathaway, an ex-con hacker hired by the government to locate the party responsible for cyber attacks that destroyed a nuclear power plant and manipulated the stock market. With these two targets, Michael Mann grounds us in the undeniably modern world of energy consumption and digital currency. Visually the film is obsessed with phones, laptops, hard drives, thumb drives, and (more than anything else) monitors. This screen within a screen becomes a cipher of the film's central theme: the split between physical and digital reality and how one interacts with the other.

In this case, however, even the first screen itself (the movie) is reaching toward this digital reality. Mann shoots his story about the marriage of humans with their computers in a way that unabashedly showcases its digital origins. Mann is a strong supporter of digital cinematography, and whether you enjoy his exaggerated neo-realist aesthetic or not, it is nowhere more appropriate than here. The film opens on a shot of the world drowning in electric blue light, and from there it dives into a thematically recursive computer-generated exploration of the insides of a computer. This establishes the setting, and Mann paints this scenery with a self-consciously digital brush. But despite its artificial foundation, there's no shortage of real impact, and the explosions and gun battles have a violent overproximity to the camera. Motion blur, frenetic movement and distorting angles all become so many expressionist strokes on this wide angle canvas.


Hemsworth's Hathaway is an ethical criminal with his own code of morals: never attack people, only those massive entities (banks, corporations) that can handle the damage, and that (for one reason or another) probably deserve it. He is a combination of the classical action hero whose strength comes from raw, masculine physicality (the western cowboy or war veteran model) and the modern action hero whose strength comes from an understanding of or exposure to science and technology (the radioactive superhero model). This muscular, technological Robin Hood is ethically counterbalanced on two separate fronts: on the one hand, the agency employing him, willing to do whatever it takes to accomplish their mission but with no investment in the people that do it for them; and on the other, the cyberterrorist bent on personal gain at any cost whose solipsistic hubris is matched only by his resources and lack of empathy.

In contrast to the impersonal motivations of the government and the fugitive they're hunting, our protagonists are driven by their interpersonal relationships. Viola Davis's FBI Agent speaks frankly of the husband she lost in 9/11, and Hemsworth's character works side by side with an old friend (Leehom Wang) and his sister (Wei Tang). In this new battleground of cybernetic moralism, the war is one of friends and family against employers and overseers. In a world of 1's and 0's, there's still nothing more important than human connection.