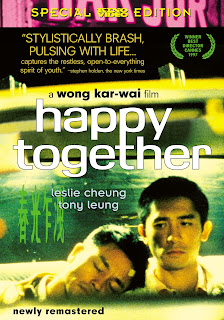 Happy Together is an expressionist watercolor of rough intimacy and unrequited romance.

Wong Kaw-Wai is the cinematic master of lost love, and here he applies himself to a particularly troubled couple. They both need to be cared for, and to some extent they both like caring for each other, but not in a symbiotic or mutually beneficial way. Tony Leung likes taking care of Leslie Cheung, but Leslie Cheung doesn't like being taken care of, and conversely Tony Leung doesn't like it when Leslie Cheung tries to take care of him in return. They like being together (each other's presence) more than they like anything about the other person (each other's being). Each of them is happy (individually) when they're together, but they don't experience that happiness together (consensually).

Both actors are wonderful in their roles, but it would be a shame not to mention Chen Chang, who plays a relatively minor role but is absolutely unforgettable. His character has the unique ability to hear conversations that are happening far away (not because he was exposed to gamma rays or anything but just because he was temporarily blinded as a child—he's more Daredevil than Spider-Man, if we want to stick with this awful superhero analogy), and Chang just plays him so sympathetically that he pops from his first scene to his last.

I've already written at length about certain aspects of Wong Kar-Wai's visual style, so I'll try to keep this brief and to the point. I love it. There are a variety of other directors I might like more than WKW for whatever reason, but if I had to pick one visual style to watch every movie in for the rest of my life, it would be his. He uses every tool from the broad strokes like color palette to the small details like shutter speed in order to blow out his characters emotions in a way which is beautiful without becoming unrelatable. Here he uses shifts between color and black & white, obstructive framing, step printing, wide angle close ups, jump cuts, and more; and it all adds to the bursting emotion of the piece. 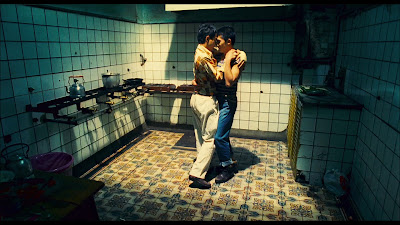 Happy Together calls for us to throw off the emotional anchors that keep us grounded in the present, unable to move forward into the future. It's a reminder that even if we're happy when we're together, that doesn't mean being together makes us happy. Sometimes we have to let go and understand that "I know where to find him if I want to see him."