Here's a taste: There's a scene where an army of lizards fights an army of frogs, and each little creature has its own little costume, and that's just a couple minutes of the film. There's a point where we leave Earth to visit seven different planets, each with their own distinct costume and set design (about 20 minutes). There's enough blood and feces and urine to saturate an entire franchise of movies. But it's even more inconceivable when you take into consideration the fact that the movie was made for $750,000 (~$3 million today; 1% of the budget for Avengers: Age of Ultron or less than a quarter of the budget for Under the Skin).

This visual imagery is used to create an enigmatic set of symbols which enriches the already ambiguous and cerebral narrative. It's easy to dismiss stuff like this as drug-fueled absurdist nonsense on the one hand or to take it too seriously as super meaningful symbolism on the other, when in reality it's a tonal mix of the serious and the comical. Jodorowsky seems to ask us to interpret just about every image he offers us, but at the same time many of these images are meant to be laughed at or taken with a hint of satire. 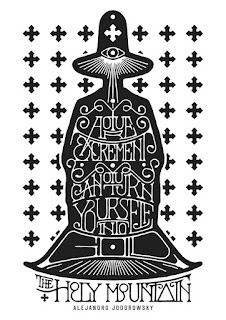 "You are excrement. You can change yourself into gold."

If The Holy Mountain is still as dense and impenetrable after repeat viewings, it is at least more comprehensible in simple structural terms. Here’s what I see as this nutty film's version of basic three act structure:

Act 1: The Thief explores the world. This opening section starts with his (messy) birth and allows us to meet our protagonist and see what kind of a person he is (as a standard 1st act would). It also allows Jodorowsky to paint his vision of society, so this is where the bulk of his cultural/political critique comes in (images of fascism, theocracy, intolerance, etc.). This is where we see the need for enlightenment both in the character of the Thief and in the world at large.

Act 2: The Thief is prepared for his journey. This begins when he climbs and enters the mysterious obelisk, a decision he undertakes hoping to acquire gold (the hook comes down with a bag of gold). Here the Thief is ceremoniously cleansed (poop + sweat = gold) and meets the disciples who will accompany him on his quest (the "Fellowship of the Ring" scenes). Jodorowsky uses this section of the story to depict a variety of archetypal identities in need of enlightenment (the Thief and his disciples).

Act 3: The Thief climbs the Holy Mountain. After everyone is prepared to leave, the final trek to enlightenment is undertaken. There are several obstacles on the way (the temptation of the Pantheon Bar, the fear of death or sexual violence, etc.) and these represent Jodorowsky's idea of the things that hold people back from attaining enlightenment and the necessary path to overcoming them. 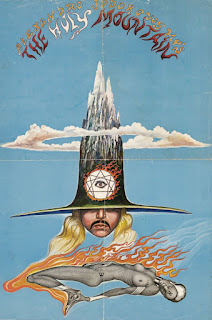 What's really remarkable about the film's structure is that each of these acts has their own (sub)structure, their own miniature narrative arcs that contribute even more the the flow of the film. In act 1, the Thief is gradually brought into temptation; in act 2, he and his party are gradually cleansed; and in act 2, they gradually make progress toward enlightenment. The film is not only a masterclass of absurd/surreal symbolism, it's also a masterclass of traditional narrative storytelling (a necessity for its type of story or it would just devolve into total nonsense).

So what story does the film use this structure to tell? For me, the message of The Holy Mountain can be boiled down to what we see in the opening sequences of the film: the alchemist takes two women that look like Marilyn Monroe (an icon of popular culture as well as of both commercial and sexual excess) and strips them of their physical adornments. He removes their makeup and their clothing and shaves their heads. They are forced to put away worldly things, as if this gesture will take them closer to self-actualization.

This sort of symbolic disrobing of the ego (the de-centering of the self) is also the journey of the central characters. First we see the Thief in the decadence of self-obsessed society, where people decorate themselves with all sort of grotesque ornamentation (e.g. skinned and disemboweled dogs) and construct around them a society based on artifice—like the planets of the disciples, each of which is structured around some perversion (sex, art, war, etc.). Then the alchemist has them throw away their money and literally abandon their self-image (they burn wax images of themselves). Eventually they have to face their fears, and through this final abandonment of their attachment to their physical being (most of their fears are of death or other personal violation), they are supposed to achieve enlightenment. 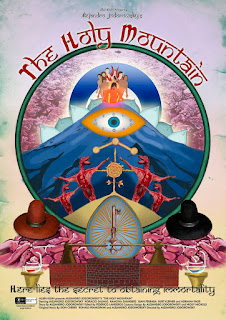 "Our bees make honey, but your flies make shit."

The central question for me, however, is whether we should take the film's presentation of enlightenment and self-actualization seriously. As I mentioned above, the film’s symbolic richness should not be mistaken for self-seriousness, and a lot of the imagery is meant to inspire laughter. The one thing that can be said with certainty about the film is that it is absurdist, and because of that it's easy to read not as a tale of the need for socio-cultural enlightenment, but a tale of the absurdity of socio-cultural enlightenment narratives. Completely drawing out this reading of the film requires a discussion of the ending, so spoilers from here onward.

If we look just at the middle of the film, it’s not hard to see why Jodorowsky might be trying to make fun of stories about self-actualization. There’s a natural comedy inherent in the idea of (for example) a man who looks like Jesus pooping in a glass jar and then turning that poop into gold by watering it with his sweat, and this makes us laugh at the idea of transcendence through bowel movement. Furthermore, when the alchemist and his disciples travel to the Pantheon Bar at the start of the third act, we’re shown a wide variety of examples of other false enlightenment narratives (the man who can go anywhere but can only move horizontally, the man who consumes all kinds of colorful mind-altering drugs, etc.).

The ending is also a key element in this reading (*this is your last spoiler alert*). After the fellowship reaches the top of the mountain and discovers that the immortals they sought were merely puppets, the alchemist breaks the fourth wall with this famous quote: 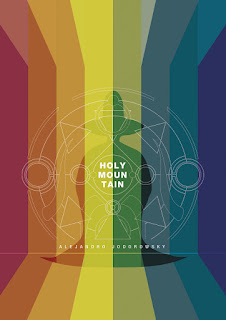 ”We began in a fairytale and we came to life, but is this life reality? No. It is a film. Zoom back camera. We are images, dreams, photographs. We must not stay here. Prisoners! We shall break the illusion. This is magic! Goodbye to the Holy Mountain. Real life awaits us.”

Here the alchemist (played by Jodorowsky himself) seems to indict the entire film as unreal, imaginary, illusory. The characters are not real people, and they have not really achieved enlightenment; the only way to do this is to leave the film, to return to “real life”.

But if it were the case that the whole film was meaningless because of its status as merely “dreams” or “photographs” then there would be no point to watching it. In this reading it’s at best absurdity for absurdity’s sake and at worst a hypocritical cinematic experience which is ethically opposed to the cinematic experience. But there’s another reading available from these same elements.

If the first half of the film depicts the world’s need for enlightenment (the fascist & religious symbolism of the Thief’s world and the various other worlds of his disciples) and the second half depicts the process of that enlightenment (abandoning their worldly possessions and their self-images, facing their fears), then the ending simply serves as a reminder that this enlightenment, this self-actualization, must not stay within the movie and must return to the real world. We need to take the lessons we learn in the theater and apply them to our lives in reality. 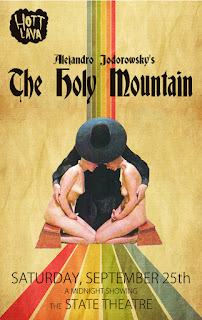 Film must not remain self-contained or it devolves into mere escapism. As Wittgentein would have it, film must be a ladder that we throw away after climbing up on it (of course, the climb is never really complete, and we must continually seek out new ladders that must also be subsequently abandoned). In this sense, The Holy Mountain is the ultimate political film: it gives us its message (the necessity of the de-centered self) without allowing us to remain in the artificial world of the film. Instead of the empty “it was all a dream” twist, Jodorowsky tells us it was only a dream if we let it stay that way.

"The grave recieves you with love. Surrender yourself to the Earth. Return what was loaned to you. Give up your pleasure, your pain, your friends, your lovers, your life, your past, what you desire. You will know nothingness, it is the only reality. Don't be afraid, it's so easy to give. You're not alone, you have a grave. It was your first mother. The grave is the door to your rebirth. Now you will surrender the faithful animal you once called your body. Don't try to keep it; remember, it was a loan. Surrended your legs, your sex, your hair, your brain, your all. You no longer want to possess, possession is the ultimate pain. The earth covers your body, she came to cover you with love, because she is your true flesh. Now you are an open heart, open to receive your true essence your ultimate perfection. Your new body, which is the universe, the work of god. You will be born again, you will be real. you will be your own father, your own mother, your own child, your own perfection. Open your eyes, you are the earth, you are the green, you are the blue, you are the Aleph, you are the essence. Look at the flower, look at the flower, for the first time look at the flowers."
absurdity Alejandro Jodorowsky analysis arthouse explained explanation fascism film identity meaning mortality movie narrative structure politics religion review surrealism symbolism The Holy Mountain