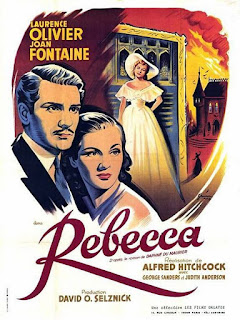 Return of the repressed maternal superego.

Leave it to Hitchcock to reinvent the standard Hollywood romance formula by taking its ideal of the perfect woman and flipping it on its head. Rebecca is a woman so unforgettable that she becomes a kind of evil presence haunting the movie. And yet the film's first half hour could easily be mistaken for exactly the type of sentimental love story that was so popular at this period in cinematic history, even down to the way it's shot (soft focus with plenty of backlight to turn hair into halos). But where Hitch takes it from there couldn't be more different.

My primary takeaway this time through the film was that here Hitchcock actually maps out the primary coordinates for his later work on The Birds (bear with me for a second). In my mind, Rebecca and Mrs. Danvers function as a kind of Twilight Zone premonition of Lydia Brenner (Mitch's mother) and the birds themselves.

In The Birds, Mrs. Brenner occupies the position of superego for Mitch and his budding relationship with Melanie Daniels (she disapproves of the union, making them feel guilty about their love). When the birds attack, this is a logical extension of that superegoic force (both Mrs. Brenner's disapproval and Mitch and Melanie's guilt): the birds are essentially attempting to keep Mitch and Melanie separate. (This is a reading offered by Slavoj Zizek in Pervert's Guide to Cinema.) 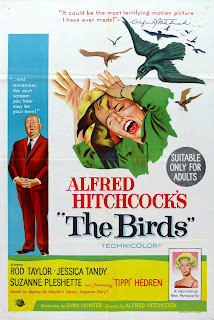 In Rebecca, Hitchcock uses the same basic psychological formation. Rebecca, the deceased ex-wife, is the same sort of oppressive, superegoic force on Joan Fontaine: Fontaine's character feels guilty whenever she encounters the prior Mrs. de Winter's belongings or whenever she's brought up in conversation, as if Rebecca is a ghostly, supernatural bird attacking her conscience.

With this reading Mrs. Danvers is the primary antagonist, the woman who seems to have a motherly love for Rebecca (the way Mrs. Brenner loves her son Mitch) and reminds Joan Fontaine of her inadequacy at every possible opportunity. Mrs. Danvers is the corollary to Mrs. Brenner, disapproving of the new romantic union in front of her and releasing a sort of ethereal assailant: Rebecca's undead presence as the "birds" of the film.