The Limit of Capitalism in Jean-Luc Godard's Alphaville 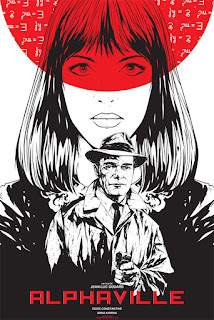 "I refuse to become what you call normal."

The rise of individualism against the tyranny of techno-capitalist conformity.

On the surface, Alphaville presents a lot of similarities to another famous sci-fi neo-noir, Blade Runner, laying the foundation almost two decades in advance. Eddie Constantine plays Lemmy Caution, a secret agent who’s part James Bond and part Philip Marlowe; a world-weary detective who looks great in a suit and can hold his own in a fight. He’s come to Alphaville from the Outlands posing as a journalist in order to investigate the disappearance of another agent as well as the mysterious creator of Alphaville, Professor von Braum. His mission brings him closer and closer to the artificial intelligence Alpha 60, the HAL 9000 of the film: a sinister computer overlord at the center of the city’s internal self-regulation.

"What is the privilege of the dead?"
"To die no more."

Alphaville shows its allegiance to the French New Wave in the way it plays with the genre conventions of both science fiction and film noir in order to create something totally new which would itself influence the future of genre cinema. Far from the escapist fantasy that 1950’s sci-fi attempted to offer, Alphaville presents a much more dark and dystopian vision of the future. There are no futuristic gadgets or robots or spaceships; instead, everything is shot at night, obscuring the plain, ordinary 1965 Parisian streets (perhaps enhancing the idea that "The past represents its future. It advances in a straight line, yet it ends by coming full circle."—the world after the descent from utopian technocracy). A further sense of otherworldliness is provided through the unconventional editing, which splices establishing shots into the middle of scenes and dwells repeatedly on single frames of mathematical equations displayed in neon lights.

Even though it is quite radical in its visual presentation (aside from the editing, characters also often look straight into the camera or are framed out of action scenes), it sometimes feels strange to get such a pulpy genre picture from such a politically minded director as Jean-Luc Godard, but his relentless intelligence slowly seeps through the celluloid as the drama develops. The film is fantastically well written (almost every interaction between Caution and Alpha 60 is utterly captivating), presenting a world without desire or love in order to interrogate modern notions of progress and to undermine the comforts of social conformity (we have to give up what we love in order to fit in), turning 1960’s late capitalism into a dystopia ruled by the inhumanities of science and technology. 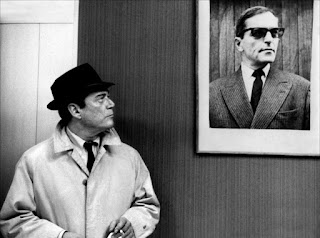 "What is your religion?"
"I believe in the inspirations of conscience."

This vision of capitalism gone awry comes through primarily in the antagonists. Alpha 60 is a constant oppressive presence in the film, with its distorted, mechanical voiceover narration, and Professor von Braum—a play on Werner von Braum, the famous German rocket scientist—is referred to as Nosferatu, as if his inventions are sucking the lifeblood out of the world. The rest of the population consists of humans turned into mindless automatons, mechanically repeating greetings ("I'm very well, thank you, you're welcome.") as if they’re no different from the computers they create—reinforced when they become helpless after the machine telling them what to do disappears. Lemmy Caution and his companion Natacha von Braum are the only ones willing to oppose this uniformity, not with romantic love but with passionate desire, both for each other and for a change in the structure of society.

"Fuck yourself with your logic."