Cracking Up: A Brief Review of Roman Polanski's Repulsion 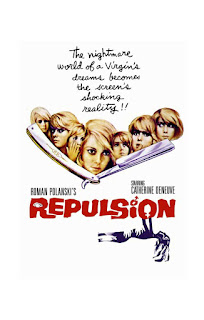 What Roman Polanski and his crew do with sound here is just incredible. Obviously much of the praise for Repulsion’s intensely claustrophobic and at times truly horrifying atmosphere is due to the fidgety discomfort of Catherine Deneuve’s performance and the dark distortions of Gilbert Taylor’s cinematography, but what I couldn’t get over from the start of the movie to the end was the way it used sound to instill a haunting disquiet—and they way it pulls all the sound out of particularly horrifying scenes. Prolonged silence. A bell tolls too many times. Water drips incessantly from an unseen faucet. A woman’s frightened voice pierces through closed windows and doors, screaming from oblivion, voicing the pain Carol can’t. Chinese water torture of a movie.

The source of Carol’s growing insanity is ultimately ambiguous, but the most interesting angle for me is the gender politics and social mistreatment the film depicts. Carol is oppressed on all sides by leering, lusty men: when she leaves her apartment, the first thing we see is a man on the street ogling and catcalling her. Her boyfriend means well, but even in his benevolence he ends up intruding on her space. Add to this the invasive nature of her sister’s loud romance, and it’s not hard to understand why Carol loses her mind. She never has a single moment’s peace. She's not allowed a personal bubble. Even her limited time alone is filled with (imaginary?) men intent on sexually violating her. Carol is undoubtedly alienated from society, but this alienation is tied up with the inescapable presence of the outside world, never visualized more clearly than in the iconic image of hands reaching in through the walls.