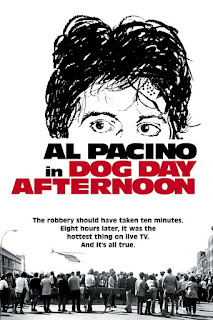 Billed as "the most bizarre bank siege ever," Dog Day Afternoon is a remarkably strange beast which comes rather close to living up to that claim.

Whereas most heist films fall fairly neatly into the action or thriller genres, this one begins as a comedy of errors and slowly changes into something much more dramatic and profound. This is the type of film that I would highly recommend watching without reading anything first, not because there’s a big twist or anything particularly spoilery, but rather because there’s a slow and subtle shift that I think is really worth witnessing on your own terms. It’s easily one of the best performances I’ve ever seen from Pacino (much more nuanced even than some of his more famous roles like in Scarface), and it’s meticulously directed by Sidney Lumet (12 Angry Men) from a carefully constructed screenplay by Frank Pierson (Cool Hand Luke). Just go see it if you haven’t.

[On the phone with her husband:] "We’re having our bank robbed!"

As Dog Day Afternoon begins, we see the central bank robbers not as benevolent Robin Hoods or nefarious John Dillingers, but as bumbling fools. The first act of the film plays out like nothing more than a farce, with one robber giving up before the robbery even begins. Pacino’s Sonny gives out contradictory orders and generally doesn't have a coherent plan, and John Cazale’s Sal slowly caves under pressure and gives up his initial confidence. Sonny jumping up and down trying to spray paint the security cameras that are too high up for him to reach is a hilarious image I won't soon forget. This first act is impressively consistent with the amount of laughs per minute it delivers. Sonny and Sal are pathetic, but in a lovable way that slowly endears us to them. They might be bank robbers, but they don’t mean any harm.

[Still on the phone, to Sonny:] "He said he wants to know what time you’ll be through."

From here, these characters take a surprisingly dark turn. Rather than offering something so simple as flashbacks, Lumet and Pierson let Sonny and Sal’s characters slowly percolate through little details in their performances and in the plot. When Sonny starts shouting "Attica! Attica!"—a reference to the Attica Prison riots—he’s not trying to incite a riot or hint at some sort of political motivation. He’s showing that he identifies as a prisoner, as someone who is being caged by society, as someone who fundamentally does not belong. He flippantly refers to himself as a Vietnam War veteran; whether this is true or not, the way he says it speaks volumes. This is a troubled man, and we live with him across a transition in his character from the performance that he hid behind to the tender, fragile core beneath. 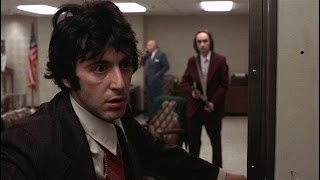 "You’re not dying, you’re killing the people around you."

In less capable hands, this evolution could easily turn into the kind of thing that feels either contrived or tone deaf, but Lumet executes it with such understated delicacy and precision that it feels entirely seamless and keeps you immersed in the character for the entire transition. The transformation is effortlessly smooth, and each side of the passage is as well developed as the other. Because of its complexity and its slow evolution, Dog Day Afternoon is exactly the type of film which must benefit immeasurably from multiple watches. Knowing the darkness that will eventually engulf of Sonny and Sal, watching them fumble with their robbery in the first act would have a completely different tone and atmosphere. Dog Day Afternoon is an incredible achievement, and one I'm glad I finally experienced for myself.