Tracing Body Parts in Five Dolls for an August Moon 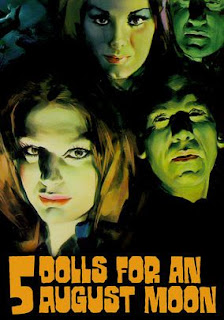 The violence of the gaze in a tangled web of body parts.

You know the setup: secluded house, big party, sex, drugs, and rock and roll, until people start dying and everybody wants to know who the murderer is. Five Dolls for an August Moon is essentially a proto-slasher (the primary difference being we only rarely see the actual murders themselves) which feels as if Bava is testing out the coordinates for Bay of Blood.

The plot isn’t exactly riveting (the scenes of the men trying to buy the professor's Super MacGuffin Formula are a little draggy), but I actually ended up liking this one quite a lot in spite of its lackluster plotting and overabundant exposition. Bava is an incredibly stylish director, from his camera moves to his soundtrack choices to his off-beat sense of humor, and here he seems to be creating the cinematic space for future directors like Quentin Tarantino to be as joyfully exuberant about their own perverted violence.

The standout for me is easily the cinematography (generally wide angle lenses with deep focus). Bava was a cinematographer before he became a director, and he often shot his movies himself. Five Dolls is an exception to this rule, but his work here with frequent collaborator Antonio Rinaldi still showcases his incredible visual sensibilities. In fact, he prefaces his entire story with an act of voyeurism, of pleasure in looking: a young woman looks through a window into the scene of a lively party (we then enter this scene, but the perspective in initially exterior, from the position of the voyeur).

The camera focuses on bodies and their relationship to each other (drawing a kind of symbolic network between them), often tracing limbs with highly choreographed pans or moving from one character to another with elaborate tracks. In the opening party sequence there’s a fascinating moment where each character shares another’s gaze with extreme close ups of one pair of eyes and methodical zooms in and out for perspective. 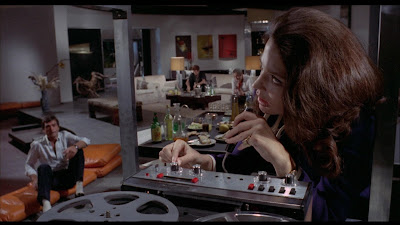 Some interesting themes are briefly touched upon (the corrupting influence of money, the conflation of love and death, romance and violence), but for the most part it’s a beautiful but slightly messy thriller. There’s also a lot of Bava’s personality here (e.g. the repeated cuts back to carcasses swaying in a meat locker to carnivalesque merry-go-round music), which I know can turn some viewers off, but personally I love it. Recommended with the caveat that if you don't like Italian horror this one's probably not going to be the exception.