The Fugitive: Hitchcockian Tension in an Action Vehicle 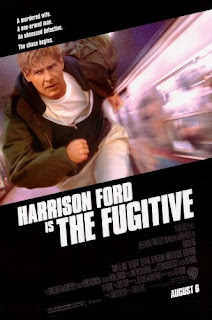 I had a lot more fun with this than I expected the second time through. I've never disliked The Fugitive, but it also never stood out to me as a great mystery or a great action movie. On returning to it, it's definitely more of the former than the latter, although the opening bus crash and the later chase sequences are also well built action scenes.

Most of the tension, however, comes from the opposition of Harrison Ford's search for his wife's murderer and Tommy Lee Jones's search for Harrison Ford. As each gets closer to the other, we feel them push and pull, and at its height the movie achieves a palpable conflict which feels as if it might tear at the seams and split open.

The Fugitive's two greatest strengths are its dialogue and its performances. Just about everything that comes out of Tommy Lee Jones's mouth is eminently quotable ("And don't let them give you any shit about your ponytail neither"), and his performance is always a pleasure to watch. Harrison Ford also gets to do some work with disguises, and watching him play multiple different characters is always fun. His character also has a solid ethical core (he can't help helping people) which successfully keeps the movie anchored.

The Fugitive's weaknesses are few and far between, thanks to a talented cast and crew, but the film is rarely elevated beyond the realm of a reliable, unexceptional thriller. The biggest problem is that the veracity of Harrison Ford's perspective is never questioned: we know he's innocent from the beginning, which sucks a bit of the tension out of what follows. 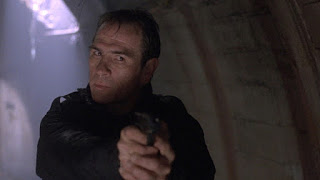 Somewhat more problematically, this also leaves the theme of questioning the integrity of the law undeveloped. Thirty minutes in, we know the law has failed by condemning an innocent man to death, and we see that failure reflected in the way Tommy Lee Jones's character doesn't care whether Ford is innocent or guilty, but there's no arc, and instead the third act reveal is just some MacGuffin-y nonsense about the pharmaceutical industry which comes out of left field.

Still, there's something compellingly Hitchcockian about the way the "innocent man wrongly accused" plot plays out, and while it's mostly safe entertainment, there are a few highlights which elevate it slightly. Not a go-to flick for me, but fairly worthy of its impressive endurance.

Movies Now and Then: Episode 9 – The Man from U.N.C.L.E. and The Fugitive (available now!)

As a side note, I'm fascinated by the crew that worked on this movie. Director Andrew Davis was best known for making action vehicles for big stars like Steven Seagal and Arnold Schearzenegger, and while this is sort of one of those, it has a bit more of a respectable Hitchcockian pedigree. This was writer David Twohy's first big success, but he would later become known for writing and directing the Riddick series. James Newton Howard, the composer, has done an incredibly wide range of stuff from the masterpiece Michael Clayton to the recent disasters of M. Night Shyamalan. In general, it seems to me like a lot of folks who are always good at their jobs, but who rarely elevate the material they work on.
action analysis crime film Harrison Ford law movie Movies Now and Then murder mystery review The Fugitive thriller Tommy Lee Jones