Lawrence of Arabia & the Deadlock of Infinite Drive 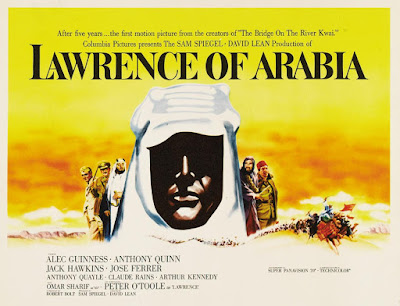 "For some men, nothing is written unless they write it."

Lawrence of Arabia is a massive, sprawling epic of a movie. You've heard of it before and you know that it's big, but it's impossible to overstate just how gigantic it really is. There's a shot in which a large number of camels appear on screen all at once, and they're each about the size of an ant. I watched this on my 40" HDTV and I could tell there was still a huge abundance of detail I was missing out on. I'm going to run out of synonyms for the word "big" pretty quickly, so just take my word for it. This movie is big. Big big.

But sheer size is far from the only thing that makes it so impressive and such an enduring text in our cinematic history. The production design is not only big, it's also gorgeous. The opening credits play over what looks like a black and white shot of a motorcycle on pavement, but as Peter O'Toole walks in, you slowly realize that it is color photography, there just wasn't anything of color in the frame. This is the film's visual baseline. A small, colorless shot of a man with his motorcycle. From here, the film goes on to juxtapose the vibrant colors of the various cities and the social life therein with the vast, bright but colorless wasteland of the desert.

The desert, in fact, becomes almost another character in the story. It structurally occupies the place of the antagonist in the film's narrative. It is both the impetus for much of Lawrence's journey through Arabia (i.e. he wants to conquer it) as well as the negative force whittling away at his well being (i.e. it is slowly conquering him in return). His journey is not only a geographical one, but an existential one as well. He must face both the immeasurable emptiness of the Arabian desert as well as the immeasurable emptiness inside himself.

"No man needs nothing."

Lawrence's character is famously introduced in a scene where he lets a match burn his fingers. "The trick," he says, "is not minding that it hurts," but he's much more than just an exemplar of macho stoicism. He actively chases this pain. The opening shot of him with his motorcycle shows him recklessly driving, faster and faster, chasing the abyss of his own disappearing humanity. He needs the existential crisis caused by facing the impossible endless emptiness of the desert; but it is also this same endless emptiness that ultimately breaks him.

After Lawrence's reckless motorcycle ride, we cut to his funeral, where a journalist inquires as to his character ("Did he really deserve a place in here?"). This is the standard setup for the mythology of the hero—he lives on past his own death in the stories people tell about him—but rather than simply sticking to this larger-than-life portrait, the film goes on to show how he was merely human. Lawrence's portrayal reverses the standard, boring biopic formula of unconditionally praising heroic exceptionality which is held back from the outside by instead showing that the deadlock comes from the inside. It is Lawrence's drive that pushes him to become the exceptional man that he was, but it is also this same drive that pushed him over the edge. His flaws were what made him great; his fall was inherent to his rise.

Like Lawrence, the film itself has become a cinematic myth, a legend that lives on in the influence it holds over the rest of the medium. And also like Lawrence, it is not a film without flaws. But it shows us how these flaws are inseparable from the successes they pull against, a Hegelian synthesis of good and evil which is itself as perfectly imperfect as its subject matter. And all the better for it.