The Man from U.N.C.L.E.: Spy Thriller or Costume Drama? 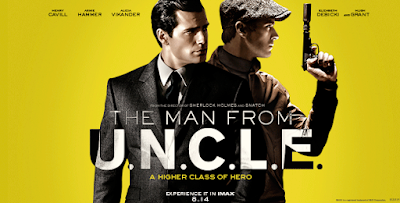 The Man from UNCLE is a homoerotic melodrama.

Wait, no, let me start over.

I'm weird about this type of movie. I'm not just talking about "style over substance" movies—although that's also true. There's little I despise more than the false dichotomy of style and substance, as style is inherently substantive and merely requires interpretation as any other element of a film does. UNCLE is all glitz and glamor, but that's exactly who these characters are. They rely on surface appearances to do their jobs, and in their free time they argue about whether a certain brand of belt goes with a certain brand of dress, or whether a certain bow tie is appropriate with a certain suit. It's not style over substance, it's exactly as stylish as the characters it depicts. It is a movie about its own style.

But what I really meant is that I'm weird about this sort of buddy-cop, two-dudes-working-together-in-close-proximity-with-their-blood-pumping-and-their-emotions-running-hot sort of thing. I have a bad habit of reading directors like John Woo and Tony Scott and Michael Mann as homoerotic dramatists when that's most likely not their intention. But whatever was meant by the central relationship in UNCLE (and Jared Harris's innuendo-filled mission statement to Cavill makes me feel justified in my interpretation), what we get is a story about two men forced against their will to work together, and the emotional arc of the film revolves around them slowly growing closer together. The climax in the film even involves one of them admitting he's glad to see the other. 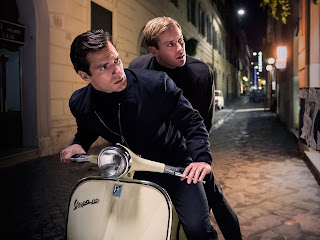 One of the key points that helps map out their relationship (and which points to how well written the script is) is what I'll refer to as Chekhov's Watch. Armie Hammer's character has a watch that he got from his father, and it's special to him because of his fraught history with his family. But it's stolen from him in an early scene, and he stops the plot multiple times afterward when he thinks he might have found it again. When Hammer and Cavill first meet, Cavill is flippant about the history that was so traumatic for Hammer, not thinking much of the watch when it's stolen; but by the end, he's had a change of heart and sympathizes with Hammer's loss. They grow closer together.

This relationship is also mapped out through the stylistically excessive portrayal of the characters' emotions—and this is where my description of the film as a melodrama comes in. When Hammer's character loses control of himself (often when he's provoked into violence), the film communicates the unbearable dimension the emotions he's feeling through the editing and cinematography choices made by Guy Ritchie and his crew. This is a common technique in melodrama, perhaps done best by the incredibly talented Douglas Sirk (these shots always come to mind). The camera shakes, the image blurs; the feelings are so strong that they emerge from the character and find their way into the celluloid itself. This culminates in a shot which literally erases a line drawn between them, externally representing their emotional connection. 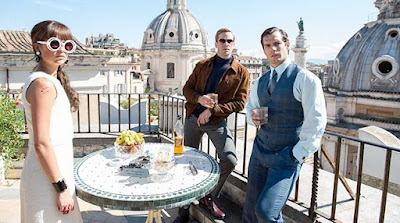 This reading is even supported by Alicia Vikander's role—which, it deserves to be said, she performs with a graceful elegance that betrays her training as a ballet dancer. She's an immensely attractive woman who comes between these two men, but even though they have scenes with her that manifest a kind of sexual tension (wrestling with Hammer, turning on her tracker), these moments don't build up to a heteronormative relationship and instead work as a foil for the "real" relationship between Cavill and Hammer. She is the (beautiful) roadblock which must be overcome before the men can be together (or better yet, as the wrestling scene and finale attest to, she's "just one of the guys").

Even if you think I'm reading too much into this angle on The Man from UNCLE, it still goes to show how carefully written the characters are. Plus, no one can deny how gorgeous it all looks. Coming out in the US two weeks after Mission: Impossible – Rogue Nation has done the film a disservice, not because it's a worse movie (I actually prefer it), but because it's an entirely different movie. They're both about spies, but they have their priorities in completely different places. Whereas M:I5 used practical stunts wherever possible, UNCLE is more concerned with shooting on location to preserve the reality and tactility of its setting and production design (a throwback to the globetrotting vibe of the early Bond movies, which survived on how well Sean Connery looked in a suit strolling through the exotic location du jour). The infrequent CGI is easy to spot, but it's only used in the action scenes, which are cartoonish anyway and ultimately take a backseat to the character moments.

This is a film about beautiful people being beautiful, not about explosions or gun battles. Even when the spies do get their guns out, these scenes are filled primarily with tight close ups on the actors' faces, strikingly lit and crafted to perfection. Instead of a man strapping himself to a plane (admirable in its own way, of course), infiltration montages are composed in split screen wipes which delightfully assault the screen in a fashion that reminds me of nothing more than Speed Racer (another tragically misunderstood gem). The action scenes climax not with the biggest set pieces, but with the biggest songs, all of which have a distinct spaghetti western vibe to them. It's a simple case of prioritizing atmosphere over spectacle.

And like the spaghetti western, UNCLE not only has style oozing out of its every pore, it also has a lighthearted attitude toward its genre that bleeds into its brilliant sense of humor. In one action scene, Henry Cavill is thrown from a boat and swims to shore, getting in a nearby truck to dry off. On the seat next to him, he finds a picnic basket with some wine and cheese. Instead of watching the rest of the boat chase (which instead continues out of focus in the background), we stay here in the truck with Cavill as he has a picnic in the middle of an action beat. This is comedy on every level: it's visual (sidelining the thrills to focus on the mundane), it's aural (the romantic melody of the soundtrack), and it's based in character (the antagonism between the two spies). This is not John Woo's Face/Off, where the boat chase takes center stage, it's more like Edgar Wright's Pride and Prejudice with guys instead of dolls. It's more costume drama than action thriller.

Only time will tell if audiences and critics weren't ready for the stylistic enchantments of The Man from UNCLE or if I'm simply giving too much credit to a pretty but hollow eggshell. I had the benefit of watching it with somebody who liked it even more than I did, so maybe I was swept up in the magic of the moment. In any case, I can't wait to see this one again. I had an absolute blast with it.