The Consequences of Impossible Missions in Rogue Nation 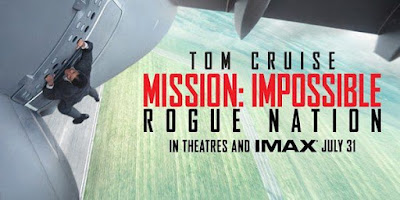 Mission: Impossible – Rogue Nation opens with CIA frontman Alec Baldwin trying to shut down the IMF for the destruction they caused in Ghost Protocol. This establishes the conflict for the film—our secret agents must operate without a headquarters—but it also establishes the film's theme. Just as the IMF is being interrogated for the consequences of its actions, so Rogue Nation interrogates the consequences of unilateral global policing. The Syndicate, the evil shadow organization supposedly behind a series of terrorist attacks worldwide, is referred to interchangeably as a paranoid delusion of the IMF and a result of its own operations. The syndicate is both a foil for the IMF and a offspring of its own creation (it's composed of agents gone rogue just like Hunt). Through this narrative, the film questions America's role in international politics and its actions in response to acts of terrorism. By attempting to control the world with our surveillance and espionage, we end up creating the very threats we intended to defeat.

Unfortunately, the film doesn’t quite go all the way. It turns out that The Syndicate is real and not a paranoid delusion, despite its paranoiac characteristics. Grounding paranoia in fact doesn’t depathologize it, and the movie doesn't do anything else to confront the IMF's violent paranoia. They're only ever questioned by Alec Baldwin, and he’s ultimately undercut by the end of the story. His attacks on the agency are never answered, and while the IMF may not be sanctioned by the U.S. Government, they’re ultimately endorsed by the film. The ethics of their choices are never clarified. Jeremy Renner seems intended as a sort of ethical counterweight, questioning the group’s decisions, but the movie always comes out on Tom Cruise’s side, even when everyone admits that their plans are less than ideal. They’re the heroes, so the film's endorsement of their actions is obvious, but the opening interrogation of their role in global geopolitics isn't quite followed through. 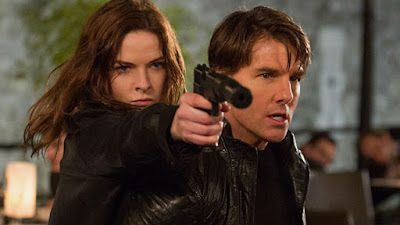 Tom Cruise brings his standard immortal physicality and endearing dedication to the project, and Simon Pegg offers not only his great comedic support but also some well executed drama based on his character’s friendship with Cruise’s (a relationship which has been building and evolving for three movies now). The real standout here, however, is Rebecca Ferguson. She has enough of a presence to fight on equal footing next to Cruise in the actions scenes without losing either the tenderness of her own struggle as a double agent or the affection of her connection with Hunt. Stuck between an MI6 that doesn’t appreciate her and a Syndicate that doesn’t trust her, she has a great inner conflict as a character and Ferguson does an amazing job bringing it out in her performance. If she’s not starring in her own movies soon, I’ll be extremely disappointed.

The action itself is all very tense and exciting thanks to Ferguson's and Cruise's presence, but it also showcases director Christopher McQuarrie’s talents as well. Known better as a writer than a director, it’s unsurprising that he knows how to set up rules for grounding his set pieces, but it’s nonetheless impressive. Little touches like the oxygen glove give us a greater sense of the boundaries of the action scenes, creating a tension based on knowledge of the risks rather than on surprises or cheap thrills. Katey Rich's point that most of the action plays out silently is a great one: the set pieces aren't cluttered with limp exposition, they're so well orchestrated that we know what's happening without being told. Some of the special effects stood out poorly for me, particularly in the underwater sequence (chasing the data card), but the film relies primarily on practical stunts and looks all the better for it. The tone occasionally oscillates between this realism and something a bit more cartoonish (the car flipping end over end), but it always succeeds at being a fun ride. 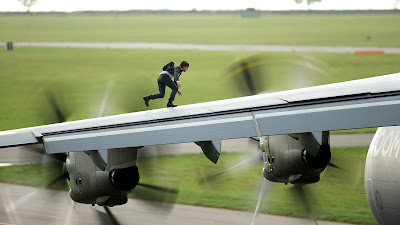 Mission: Impossible - Rogue Nation is unashamed about playing its genre conventions completely straight (no ironic winking here). It’s obviously not in the same league as subtler or more subdued espionage films (I love you Tinker Tailor Soldier Spy), but it’s not trying to be, and that’s part of what makes it so enjoyable. There's a moment where the CIA, the IMF, and MI6 are all in a room together (along with the actors who played Aaron Cross and Jack Ryan), and it’s such a huge spy crossover that the nerdy half of my heart just absolutely melted. It might not quite be enough to join the ranks of my favorite films of the year, but it was consistently entertaining enough to justify the price of admission, and as a summer blockbuster was an undeniable success.
action analysis Christopher McQuarrie espionage film genre geopolitics Mission: Impossible - Rogue Nation movie politics Rebecca Ferguson review Simon Pegg spy state power stunts thriller Tom Cruise