Chinephilia and Sentimentality in Cinema Paradiso 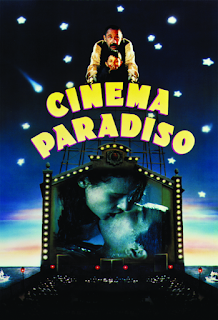 "You and your stupid movies!"

A heartfelt and sentimental journey through the life of a budding cinephiliac, Cinema Paradiso presents a world which is probably recognizable to everybody here on Letterboxd whether you live in Sicily or the Netherlands. It's about a young boy who grows up with a projectionist for a substitute father figure and who spends his free time examining discarded frames of famous films. The delight and wonder offered by these cinematic diversions becomes an integral part of his life, just as it has for all of us. As we move through his life, his taste evolves from simple slapstick to more deep and developed dramas, and this matched maturation builds a remarkably relatable character.

And yet, cynical heartless robot that I am, there was a brief period at the beginning of the film where it really wasn't working for me. I'm allergic to schmaltzy sentimentality, and the first act is painted like a soap opera, in the broadest possible strokes. All of the movies that Toto watches are escapist romantic fantasies, and the film likewise presents his life as one of escapist romantic fantasy. But, to be fair, that's exactly how life feels at that age. Toto is just a little boy when the movie begins, and everything is either the best thing that's ever happened or the worst because nothing has really happened to him yet. He’s still young, and he needs these fantasies in order to structure the life ahead of him.

Furthermore, this overt emotionalism develops over time in parallel with Toto’s cinematic taste and personal growth into something much more complex. He eventually falls in love, and the romance he experiences is as heightened as the sentimentality that preceded it. The idea of totally inhabiting the character on screen, of delivering his emotions exactly as he feels them, eventually builds up to an absolutely overwhelming climax. What begins as a simplistic fantasy world expands to reveal something much more profound, not only about how our experience of film affects our lives, but about life itself. (Hey, if the film's allowed to be sentimental then so am I!) 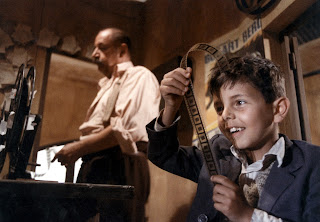 Alongside this emotional development is a matching development of Toto’s understanding of the world around him. When he’s a child at the beginning of the film, there’s political intrigue all around him—but he pays no attention to it. In the background of an early scene, a man is told to "Ask Stalin for a job," an event Toto ignores but the film doesn't. This is post-WWII Italy, and Stalin is still in power in Russia, and the fallout from the massive global conflict is still felt around Toto, even if he doesn’t feel it directly. Cinema Paradiso appears on the surface as a fundamentally apolitical film, but if you look closely its politics begin to shine through the cracks.

Cinema Paradiso is a sincere, impassioned, and touching portrait of the life of a film lover that captures the magic of a hobby (or profession, for the lucky few of us) which we all share; but by chronicling the entire life of a man who participated in it, the film also touches on themes of life and happiness on a grander scale. What does it mean to live a good life? We’ll never know for sure, but Cinema Paradiso, with its sweeping score and genuine performances, takes us one step closer.