Sex without Emotion: The Dreary Politics of Shame 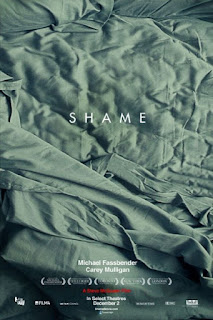 Steve McQueen's directing stands out as the primary force shaping the feel of the film. Every scene is very precise in its tone: the cold, slow, bleak life of a man without desire, a life which is more like death. This atmosphere seeps into every aspect of the filmmaking: the camera is always steady, and its few, subtle movements have a controlled sense of choreography that only comes from a director with a distinct vision (and a cinematographer with a strong hand, of course).

The editing is rarely intrusive, portraying events as objectively as possible with relatively few cuts, but occasionally speeding up to communicate a more frenzied state of mind. The score is also quite powerful, and does a lot of work to express the emotions that our protagonist has so tightly bottled up inside.

And speaking of the protagonist, Michael Fassbender is absolutely fabulous here. None of the characters have a lot to say (a fact which is impressive in its own right, since visual storytelling is often more difficult in drama than other genres), and Fassbender conveys a profound inner sadness with the mere flick of an eye. And it doesn't hurt that he's absolutely gorgeous in a movie that calls for him to be naked quite frequently.

Also gorgeous are his co-stars Carey Mulligan and Nicole Beharie, who don't have as much to do simply playing foil to Fassbender's lead, but they both leave quite lasting impressions. Mulligan has a powerful scene late in the film which is impressively shot and performed in a single take, and Beharie has a wonderfully tense scene in a restaurant where she and Fassbender play off the awkwardness of being constantly interrupted by waiters.

My problem with Shame is that, to me, it feels like two different movies.

In the first movie, you have Fassbender's Brandon dealing with his sex addiction. He is a man for whom sex has lost its emotional dimension. He has sex for sport, as a recreation, and this lack of emotional affect mirrors the lack he feels inside himself. So when he starts to fall for a woman he works with (Beharie's Marianne) and finds himself unable to consummate their relationship, he feels embarrassed and attempts to confront the hedonistic lifestyle he's been living. 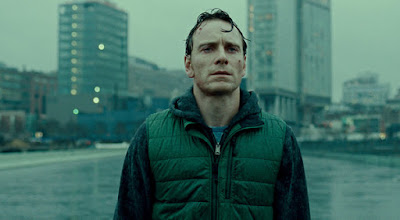 And then there's the second movie, which is also about Fassbender's Brandon, but is instead concerned with his family life and the question of his responsibility for his sister (Mulligan's Sissy). He's been pushing her out of his life, not answering her phone calls, but she needs his help. Without a positive role model in her life, she's spiralling out of control. He lets her stay at his apartment, but she tests the durability of their relationship when she sleeps with his boss, exacerbating Brandon's already unstable professional life.

But that's not the entire problem. I can appreciate the difficulty in telling a story slowly like this, and the measured tone certainly matches the characters, but for me it occasionally became ponderous. There's a scene where Sissy sings a rendition of New York, New York which is almost excruciatingly slow, leaving unnecessarily long pauses in between notes and words, and this song is a microcosm of the film itself. It leaves plenty of negative space in between its notes, hoping that the richness of its character will fill in these blank spaces, but it never quite happens. Instead what we get is a beautifully shot scene of Brandon running in the wake of a tense encounter with his sister, but there's not enough depth to their characters yet to provide this kind of insight.

Ultimately I found Shame to be an incredibly well executed telling of a tale that didn't quite work for me. However, it proved that director Steve McQueen, cinematographer Sean Bobbit, and star Michael Fassbender are all forces to be reckoned with in our current cinematic landscape. So even if it's not a film I plan on returning to anytime soon, it was certainly an enjoyable experience and one I wouldn't hesitate to recommend to others.