Sunrise: A Song of Two Humans: The Appeal of Silent Film 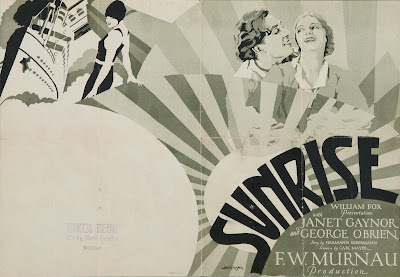 Like many modern film viewers, I often have trouble connecting to silent films. Over the years of cinematic history, filmmakers have developed shorthand techniques for expressing action, emotion, and theme in a way which is not necessarily better but is almost certainly easier. And yet, most of the silent movies that remain in the cinematic lexicon have something special which makes them remain watchable to this day. This movie is barely farther from the origin of cinema itself than I am from my own birth, so it's totally impossible for me to conceive of how revolutionary it is; but the fact that it never feels distractingly dated or artificial is an incredible testament to its success.

The Song of Two Humans of the film's title sings of the lives of a man and his wife at a time of emotional turmoil. When the story begins, they've been together long enough that the man has begun to long for something new. He takes a mistress, and together they begin to plan an untimely demise for the man's wife. But just as he's about to pull it off, he stops himself—but only a second too late, and his wife has seen the evil inside of him. He's determined to win her back, though, and their journey back into love is one which is simultaneously thrilling and tender.

But what's truly amazing about Sunrise isn't merely that it's still watchable, but that there are moments in it which have yet to meet their match in today's "modern" cinema. In particular, the way the film uses dissolves is just spectacular. It holds on dissolve transitions longer than most films, reminiscing in the duality of two overlaid images (a technique used in one of this decade's most innovative cinematic works, Under the Skin), and uses them in other creative ways, like dissolving only half of the frame to create a kind of faded split screen. This is not only used to offer a fantastically dynamic imagery when the context calls for it (e.g. the character's internal image of "the city"); it's also used as a travel shot which is so much more interesting to look at than the standard "pan right across a wide shot" we see all the time today. 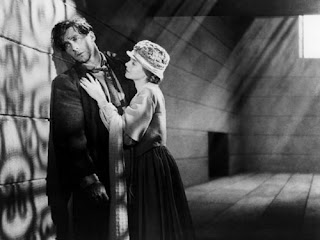 And this isn't even taking into consideration the film's most famous shot. The man and wife, reunited after a lot of hardship, walk through the city streets—but then, the streets fade away into the beautiful majesty of the countryside. This sort of unadulterated creativity reminds me of nothing more than today's special effects shots, but done at a time before special effects were a thing people did. This really got me wondering: when was the last time we saw special effects or any sort of creative visual techniques used in a romantic drama like this one? Without getting too analytical about my problems with the modern blockbuster (let's face it, nobody likes it when I do that), it's safe to say that this is a wonderful visual delight found in a genre you'd never expect.

I could go on about how great this movie looks (even the intertitles are impressive, particularly the "Couldn't she get drowned?" one that drips off the screen as if it itself is also drowning), or how amazing it is that it tied these visuals into a relationship which is at the same time relatable but not cliched, emotional but not mawkish; but I don't possess the poetic language to really do the film justice. Sunrise: A Song of Two Humans is a silent film which has truly stood the test of time, and one which deserves to be seen by all cinephiles.