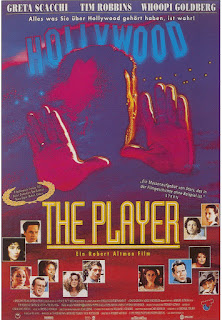 The Player is a Hollywood satire which, as all great satire does, looks less like satire today than it did when it was made.

Tim Robbins plays Griffin Mill, a big studio producer worried about being pushed out of the business by younger talent. He's been receiving death threats via postcards from a writer he snubbed at some indeterminate point in his career. When he thinks he's found a lead, he goes out to investigate and ends up killing a writer. He is forced to cover up his crime while maintaining his position at the studio and juggling his budding romance with—of all people—his victim's widow.

And for the most part, Griffin Mill is a pretty sympathetic guy. We all struggle with our work, even if we don't work for something as high stakes as Hollywood filmmaking. Mill makes some bad decisions along the way—okay, a lot of bad decisions—but he never seems like a downright bad person. He's just doing his job like everyone else, trying to save his skin the only way he knows how.

Until that final shot.

Like all good Hollywood satire, The Player spends a lot of time examining the nature of metanarratives and the truth (if any) in stories we tell about ourselves. The way the film portrays Hollywood storytelling obviously has a lot to say about the stories we tell (what type of movies do we make/watch), but when Mill's life starts turning into a movie script, this commentary takes on another level. Like Mill (albeit in a less literal way), we experience our lives not as something separate from stories we tell, not as something which doesn't confine to a set of narrative rules or structures; rather, we directly experience our lives in terms of the stories we tell (this is what Lacan means when he says "truth is structured like a fiction"). We reframe our lives as a narrative, whether it actually fits or not. (For comparison, see also Synecdoche, New York.)

But the film also uses its satirical elements to poke fun at the formulaic nature of Hollywood storytelling. Mill tells his clients that a story needs a variety of elements to work as a movie—elements which mostly involve marketability, but he's a producer, he has to be practical. On the other hand, most of the writers in the film criticize how safe Hollywood is, with its simplistic heroes and pat happy endings. One writer in particular states that he wants to make a movie, but that he wants to do it without the Hollywood cliches, without the stars and the glitz and the glamor. 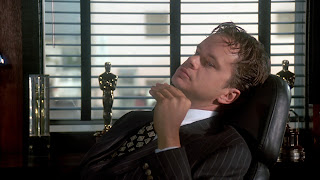 They eventually make this movie, but what it turns into is hilarious in a way that's not possible to talk about without spoiling both the ending of their movie and of The Player itself. So if you haven't seen this yet, then go watch it. Even if you don't fall in love with it like I have, it has so much to say about the state of Hollywood which is still relevant today that anyone interested in movies should be able to enjoy it. But, for now, I'm going to get into spoiler territory, so turn back if you want to see this fresh.

By the end of the film, The Player is really daring you to side with Griffin Mill. He literally gets away with murder and impregnates the widow of his victim, and in the final scene he is clearly feeling no remorse about it. If anything, this is the one point where the film devolves into cartoonish caricature: Mill comes home to a smiling wife with a bulging belly, and it's shot like an idyllic family paradise despite the fact that one of them is a murderer and the other was emotionally manipulated by him. 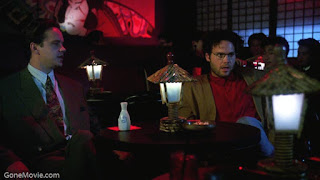 So this is The Player's vision of producers: murderous sociopaths. But the film takes its satire a step further than this. The film within the film, titled Habeus Corpus, was originally planned to end on a low note regardless of what audiences thought they wanted. But in the end, the filmmakers (even the original writer) cave on all their principles: they cast big stars (Julia Roberts and Bruce Willis, exactly the ones they said they wouldn't cast), and they give it a cheap, heroic happy ending. Everyone's a sellout.

But the most crucial detail is Bruce Willis's dumb one-liner, "Traffic was a bitch," a line which Mill repeats right at the end of the film before the final credits roll. Drawing this direct parallel between Bruce Willis's pat heroics and Mill's own happy ending does two things. It further indicts Mill's supposed innocence by reframing him as a cheap trick, a concession, a step away from true artistry. But much more condemning is what this character comparison does in the other direction. By aligning Willis's representation of Hollywood heroism with Mill's criminal amorality, The Player it telling us that if we look more closely at our cinematic heroes, we might find murderers and sociopaths. Hollywood is selling us villains as heroes, and we're eating it right up.