James Bond Marathon: For Your Eyes Only 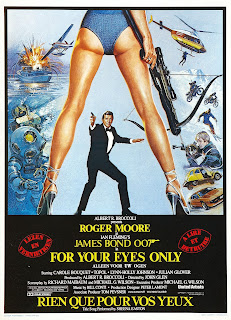 Why does the best Bond stuff always involves skiing?

For Your Eyes Only is often hailed as the beginning of the end for Roger Moore as James Bond, but put more simply it’s just the last Moore Bond with any redeeming qualities. For me there was never really a beginning of the beginning for Moore; The Spy Who Loved Me just stands alone as the only truly great creation during his tenure. But that’s largely due to my personal bias: Moore is easily the silliest and campiest of the Bonds, and here we see him playing to his strengths.

Bond holds Blofeld from a helicopter and drops him down an industrial chimney in the first 5 minutes of the film. This gives us the tone at which the rest of the movie will be pitched. After this we get the premise of the plot: some British folks in a submarine lose control of some Top Secret MacGuffin Business. Their sub goes down and leaves valuable information at the bottom of the ocean, which MI6 is tasked with retrieving at all costs—costs which apparently include sending Bond skiing again.

This is all you really need to know: whatever happens, it sends Bond through a series of increasingly outlandish set pieces for him to fumble his way through (one involving a hilarious hockey fight in which Bond literally scores by beating his enemies into the net). It is unrestrained in its exuberance (although there’s surprisingly few one-liners), and the fact that there’s not much going on in the background only holds this one back slightly (more mumblings about détente, but nothing of any real substance).

After Moonraker sent me running for the hills, delaying my Bond marathon for almost two months, For Your Eyes Only was a fairly pleasant way to ease back into one of my least favorite Bond actors. And now, to my dismay, I have two of real duds to contend with. Here’s to hoping Timothy Dalton comes quickly.

RIP Bernard Lee, and sorry your replacement was so lame.