James Bond Marathon: The Man with the Golden Gun 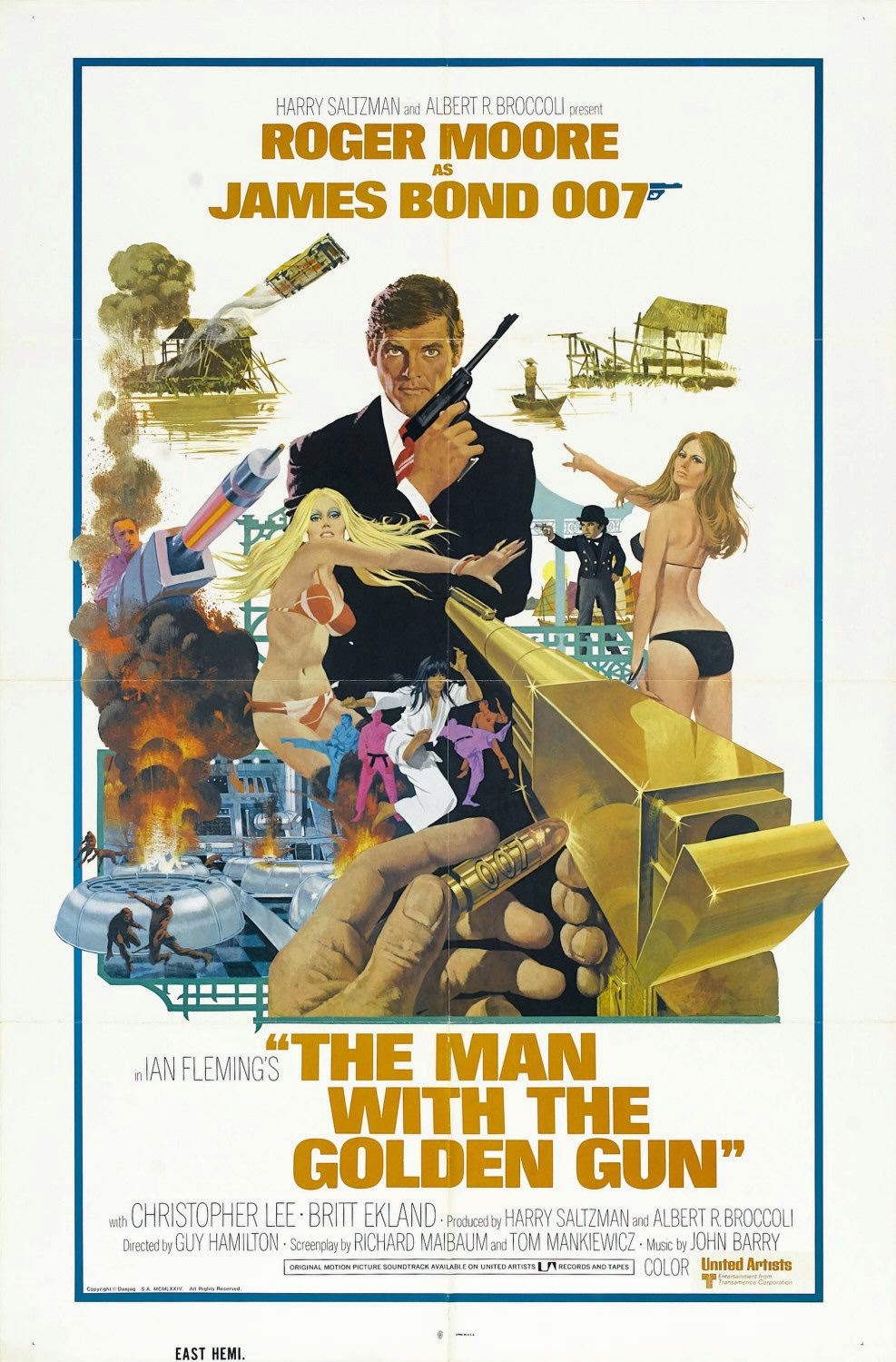 "You get as much pleasure out of killing as I do, so why don't you admit it?"
"I admit killing you would be a pleasure."

The Man with the Golden Gun is one of the first Bond films to confront its central character with the realities that an actual assassin might have to face (something that wouldn't really be done thoroughly until the Craig Bonds). When Scaramanga asks 007 to admit that he derives pleasure from killing, he never gets a straightforward reply, but all of Bond's responses indicate not only that he enjoys killing people but that he would even like to kill Scaramanga in cold blood. This is a question the movie is asking us to take seriously: not necessarily whether an assassin would have to enjoy killing—that much seems obvious—but rather, with James Bond as our on-screen surrogate, do we have to enjoy killing as an audience? What do we make of the pleasure we take in the deaths we watch Bond execute?

Of course, you'd be right to pass right over these remarks, since the rest of the movie is fairly light-hearted and silly (like most of the Moore Bonds). But there is one more stab the movie makes at reality: the energy crisis. Modern civilization relies so heavily on energy consumption, and it's not clear where our next source will come from after the well of fossil fuel dries up. This is something that plays both explicitly across the surface of the text (M clumsily exposits as much to Bond), but much more interestingly also beneath the surface. Scaramanga has harnessed the power of the sun in part to create an energy monopoly, but also (and much more appropriately for a Bond villain) in order to create a powerful laser beam. This duality between destructive economics and economics of destruction perfectly represents our fears about new sources of energy: they can be manipulated to extort more of our hard-earned money, and at the same time they can be used to create dangerous weapons (historically doesn't all technology get appropriated by the military?).

Beyond these subtextual elements, The Man with the Golden Gun is a pretty unremarkable installment in the Bond franchise.

On the plus side, there's Christopher Lee. The perfect Bond villain? Probably not, but boy howdy do I love him. He's debonair enough to challenge Bond at a social level, talented enough to challenge him at a physical level, and evil enough to pull it all off. His performance might be a bit mustache-twirly or scenery-chewy, but all the best Bond villains are like that. Nick Nack is also a great sidekick, and his trickery at the end always gets me.

Then, on the polar-opposite end of the spectrum, there's the shrill antics of Clifton James. A commentary on the idiocy of American tourism? Maybe. But he's just so annoying. I can tell it's supposed to be comic relief, but it just doesn't work. I enjoy the payoff when he gets knocked into the water, but then he comes back for more of the story. Just kick him out of the movie!

The women in Golden Gun are also some of the more frustrating for the franchise. Bond has always had trouble with women, but there's an important difference between showing a world in which women aren't allowed to be equals, and showing that women don't deserve to be equals. Goodnight (Britt Ecklund) is almost made into a redeeming character, but every time she tries to do something good she ends up screwing everything up. She's well intentioned but inept, which I guess isn't the worst the series has done, but it's still not good.

Also, the funhouse mirror sequences that book-end the plot (Scaramanga's killing field) are a huge highlight for me. They're colorful and fun and edited in a way that gives them more tension than most Bond shoot-outs (come on, we know even if he dies he's gonna be back for the next movie, at least this one amps up the mystery).

Ultimately, however, the film spends too much time struggling against a lot of heavy exposition, along with the franchise's typical problems with exoticism and Moore's typical problems with an overabundance of silly nonsense. A bit of a guilty pleasure for me (mostly due to the presence of Saruman), but it boils down to a pretty average, middle-of-the-road Bond.

In the interest of full disclosure, this is another Bond (along with Thunderball) which I probably like more than it deserves because it was a childhood favorite.
action analysis espionage film Guy Hamilton James Bond movie mystery review Roger Moore The Man with the Golden Gun thriller