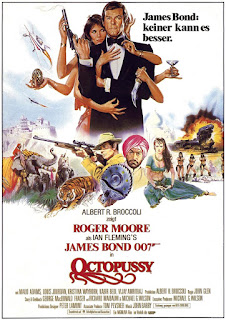 "I haven't time for these adolescent antics."

Bond on autopilot—autopilot on a crash course straight to the bottom of the Bond barrel.

Octopussy is a case study in a plot with no narrative momentum. Things happen, but they don't build on each other. Scenes may work by themselves, but there's no connective tissue holding them together. They're like so many beads without the string to turn them into jewelry.

Looking at the history of its production, there's no mystery why it's the least inspired Bond film in the franchise. The copyright to Ian Fleming's source material had always been held by one man at one studio (Albert R. Broccoli), with the exception of the novel Thunderball, which was also owned in part by its co-writer Kevin McClory. McClory used this intellectual property to make Never Say Never the same year that Octopussy was scheduled to be released, and as a result the official Bond studio Eon Productions made some questionable decisions in a desperate attempt to compete—including pulling Grandpa Moore out of retirement after his contract had expired and he had expressed interest in leaving.

This preference for formula and familiarity over inspiration or ingenuity created a film defined by those characteristics. From the dud of a cold open onward, there's just no excitement, and there's no story to ground the action (it's no surprise to learn that hardly any of the source material was used for the script). The bad guys are making replicas of expensive art, and then suddenly they have a nuclear warhead—because, you know, making fake art is pretty much the same as making real bombs. Oops. Guess we should have seen that coming? They are the bad guys, after all.

Thematically it delves headlong into the realm of adolescent male fantasy, featuring a variety of characters and locations that would feel right at home in adolescent fan fiction. There's an island of sexualized women that are almost given agency in a big (read: cluttered) battle, but are ultimately reduced to objects more for the viewer's pleasure than for their own sake. The villain is little more than a schoolyard bully who successfully antagonizes the "good guys" into retaliating with unnecessary violence by striking first and assuming (correctly) that everyone else would stand around pointing fingers. Talk about childish.

The action is occasionally entertaining in an idiotically excessive, almost campy way (rickshaw wheelie), but it's mostly dull thanks to the lack of narrative backbone. There are two genuine laughs, but the rest requires ironic distance in order to enjoy as comedy. It's not offensively bad, but it's neither genuinely good nor insincerely silly enough to be really worthwhile, which in my book is even worse than something which is problematic but fascinatingly so. At least those movies give you something to think about. This is my all-time least favorite Bond, and it's not because it's racist or sexist or otherwise offensive, it's just because it's unendurably boring.