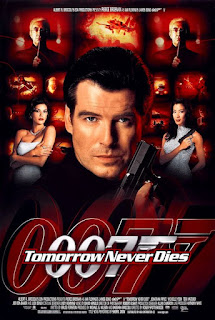 "They'll print anything these days."

Chronology & Stats
James Bond #18
Star: Pierce Brosnan #2 (my favorite of his)
Director: Roger Spottiswoode #1 (his only one)
My Ranking #7

The one where they say "satellite" way too many times.

If GoldenEye brought James Bond into the contemporary world by replacing the franchise's dated international politics with a commentary on the threatening possibilities of new technology, then Tomorrow Never Dies is the final destination on that path.

Elliot Carver (Jonathan Pryce) is a media magnate bent on world domination. He controls public perception through every news outlet available to him, and he uses this power to turn England against China. Along with the help of Chinese secret agent Wai Lin (Michelle Yeoh), 007 must stop Carver and his stealth boat before he launches a stolen cruise missile and starts World War III—all for a great headline.

Beginning with my all-time personal favorite cold open, Tomorrow Never Dies proceeds to completely drop the quaint Cold War antagonism between England and Soviet Russia (still present even in GoldenEye) for a much more modern look at global geopolitics. Tensions are high between England and China, but the real enemy is Carver, working behind the scenes pitting one against the other. Here we get a crucial progressive shift in political ideology: the enemy is no longer Communism (China), but rather a manipulative capitalist media conglomerate.

The positioning of Carver as the "real" enemy highlights the distorting effect of ideological propaganda, retroactively problematizing the simplistic worldview of the previous Bond films. It was never just England vs. the Communists, there was always an unspoken third party determining the fundamental framework of this political discourse, and that third party is here embodied in Carver Media Group Network. Tomorrow Never Dies is the key that unlocks the politics of the rest of the Bond franchise.

But Carver is more than just an ideological propagandist: on top of being the film's representative of capitalist overconsumption, he's also the malevolent counterpoint in the film's portrayal of technology. Here Carver is a media mogul with a cable news network, a megalomaniacal David Letterman of sorts for the time, but today he would be Mark Zuckerberg or Steve Jobs (or, better yet, a kind of parallel-dimension evil-twin super-genius Donald Trump). By tackling such a contemporary issue, Tomorrow Never Dies has remained one of the most thematically relevant Bonds.

Carver's character embodies two crucial shifts for the 007 franchise: first, the communist nemesis is displaced onto a capitalist tycoon scheming behind the scenes; and second, the fear of technological progress is split into fear of its diabolical potential and praise of its proper application (Carver and his TV satellites are essentially an industrial counterpoint to MI6 and their more benevolent GPS). Technology can be good, so long as it's not used exclusively for monetary gain. Or, you know, for global domination.

In terms of the film's sexual politics, it continues the trend started by GoldenEye of questioning the misogyny of the series's past. Dame Judi Dench gets some great lines that turn the tables on her male peers (With all due respect, M, I don't think you have the balls for this job." / "Perhaps, but the advantage is I don't have to think with them all the time."), and Michelle Yeoh is never subordinated to Pierce Brosnan in either strength or intelligence. The women in the film are always at least as capable as their male counterparts, if not more so.

From a technical standpoint, Tomorrow Never Dies is one of the best looking Bonds to date. Shot by modern camera genius Robert Elswit, it has an impeccably clear staging thanks to deep focus, wide angle lenses, and concise, steady framing. Even when editing speeds up during the action scenes, it's always easy to tell what's going on thanks to the methodical and efficient delivery of all the important visual information.

Stylistically, the film's cinematography also offers a lot of flair, particularly in terms of its lighting. Elswit puts reflections in Carver's glasses to give him a piercing gaze while keeping his emotions at a distance; elsewhere, he beautifully silhouettes him to enhance his mysterious menace. He shot this movie after working with Paul Thomas Anderson on Boogie Nights, and while this obviously doesn't have the same artistic pedigree, Elswit's abilities come across in the coherence and transparency of everything on screen.

I've never understood why this movie doesn't get more credit. The consensus seems to be that GoldenEye is the superior Brosnan Bond, but for my money I'll always take the intelligent political awareness and beautiful camerawork of Tomorrow Never Dies. It's a personal favorite of mine, and an easy Top 10 candidate.