James Bond Marathon: A View to a Kill 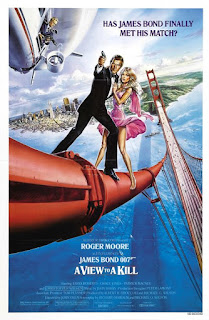 The one they did on How Did This Get Made.

A View to a Kill has a reputation as one of the worst of all the Bonds, but while it definitely has its fair share of problems, I didn't hate it quite as much as I expected to—although it's certainly possible I was just glad to finally be done with Roger Moore, or that my standards have fallen so low that I’m happy to simply not have hated it, or that I had absolutely the lowest of expectations going in... yeah, this movie has some problems.

Here, Bond goes contemporary (ironic, considering the deepening trenches in Moore’s face). Between the neon lights of the opening credits and Duran Duran's new wave theme song, the film has a more distinct 80's feel to it than most other Bonds had of their respective decades. The central MacGuffin object is a microchip immune to electromagnetic pulses and Christopher Walken's evil villain scheme involves taking control of Silicon Valley. Where previous Bond films attempted to tackle international politics (particularly the Cold War, which effectively gave birth to the series), this one navigates the uncharted waters of modern technology.

Perhaps unsurprisingly given its current (un)popular standing, it definitely doesn't hold up to the largely agreeable reception of its original release. Most of the script is content to trot out the old tropes of previous films without any changes, and even the bald-faced attempts at generating artificial tension fall flat (May Day doesn't recognize Bond right away despite having fought with him in a previous scene, as if the writers are trying to build a sense of fear around Bond's potential discovery, but then she remembers who he is after he's already basically outed himself anyway). Zorin's plan also just makes no sense: his power and success come from his position as a microchip manufacturer, and he wants to destroy Silicon Valley, the primary consumer of microchips. He wants to  get rich by killing his customers.

It's also hard to believe this came out only one year before Aliens, since by comparison the action here is snore-inducingly tame, and it's not even working around a zany alien-monsters-in-outer-space premise. The front projection also looks really bad and detracts from any remaining tension or excitement left in the action set pieces. Roger Moore is clearly too old to do any of the stunt work (that was true at least two movies ago), and the double they brought in is glaringly obvious and stands out between every cut. Moore said himself, "I was only about four hundred years too old for the part."

But there are elements in it which still work. Mostly it's the comedy that shines: while it's often easy to laugh at some of the Moore Bonds ironically, this one plays for intentional laughs (I think?). I'm willing to forgive a lot just for the gag with the car falling apart and driving around on two wheels, and the opening scene with Bond snowboarding to the Beach Boys put a huge smile on my face. Walken is also a great cartoon villain in the vein of classical cartoonish Bond villains, and he has one of the cooler secret underground lairs in the Bond universe.

Don't get me wrong, A View to a Kill is a huge mess, and it can be a frustrating mystery in its own ineptitude, but it's not quite as intolerable as I was lead to believe. This is the epitome of damning with faint praise, but A View to a Kill isn't the worst Bond movie ever. But it is pretty close.