"The system is rigged! They want us to think it’ll protect us. We protect us!"

When corporations realize they're too big to fail, they start putting human lives at risk in exchange for short-term financial gains, and we let them do it because we're terminally disenfranchised, we're bound to the system that oppresses us, we can't adequately resist because we need money to buy food and pay for shelter.

A small-town farmer's cattle are dying by the hundreds, and he's convinced that a nearby landfill is to blame, but no one with any power will return his phone calls, so he desperately resorts to a tangential family connection and asks a corporate defense lawyer to switch sides and prosecute the very people he became successful protecting. 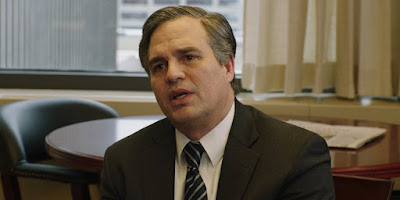 In this way, Dark Waters develops a double-edged conflict: the people most affected by these corporations have no power to do anything about it, and the only people who do have the power to do something are already bought and paid for by the corporations themselves. Meaningful change requires and an insider to betray their employer.

"You knew, still you did nothing."

So our protagonists decide to sue DuPont, but this is where we feel the effect of the sword's second edge: because DuPont was precisely the type of corporation large enough to bury its deadliest secrets without any consequences, it was also the state's largest employer. Our heroes are shunned because doing the right thing has made life harder for folks who relied on DuPont for work.

This is how we become enslaved by capitalism: it provides both the means of our existence and the means of our destruction. We rely on evil corporations because we need money to live, and there's no escaping this reliance, there's nowhere we can go when these companies exploit us for our labor and our resources. We can't remove their power because we need them to be powerful.

"They have all the money, all the firepower, and they’ll use it."

Dark Waters joins The Report and Official Secrets in this year's cinematic discussion of how people with too much power do things that they know are wrong and how hard it is to stop them, but this aforementioned economic framework is what makes Dark Waters the best of the bunch for me. It's just as blunt and didactic, but it reaches toward a more meaningful modern moral deadlock.

As Rob Bilott expresses toward the end of the film (and as I quoted him at the start of this review), the system is built to make us feel like we're protected from this kind of obvious abuse—we have lawyers, governments, and science to protect us—but because everything comes back to money, this system will always be rigged against us. The system will always serve whoever has the most money.

So what do we do about this structural defect in the system? "We protect us," he says, people protect each other. This position is both descriptive and prescriptive: the only way people have historically succeeded against entities larger than themselves is by relying on other people, and likewise the only way we'll overthrow this corrupt system is by relying on ourselves. The system won't fix itself.

It may be small, but there's an elegance and an eloquence to this message that these other didactic political dramas are missing. Sure, the system is corrupt, but what do we do about it? We rely on people. We make them public. We make everything public. The cure for the broken hierarchies of capitalism is the open equity of socialism.

PS. Anne Hathaway steals the show here multiple times. She is powerful, she is understanding, she is radiant. She stands up to her husband when he's being selfish and absent, she stands up for him when he's hurting and needs her support. She is an outspoken woman in a world run by men. Love her. And in a similar vein there's a running "joke" that I loved about how the Louisa Krause character is always up for promotion but never gets it, presumably because it was given to a (less successful) man; another woman doing her best in a man's world.
2019 capitalism corpo crime dark waters disenfranchisement exploitation female agency law mystery patriarchy politics science sexual politics socialism thriller todd haynes