The Lighthouse and the Gothic Sublime 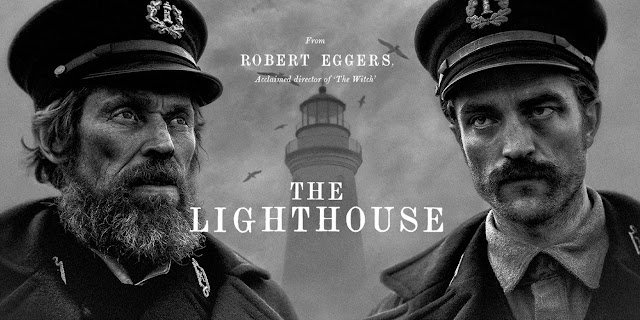 "What made your last keeper leave?"
"He believed that there was some enchantment in the light. Went mad, he did."

The Lighthouse is true Gothic horror, a genre commonly characterized by raging storms and madman, set in an antiquated space (here, an old lighthouse), and featuring secrets hidden from the characters (the two protagonists' mysterious pasts), the repression of which manifests itself in the form of hauntings from monstrous beings (the mermaid, the storm, even the ocean and the lighthouse themselves). Even the score identifies this as a Gothic space: low, tremulous, intermittent sounds create a haunting atmosphere indicative of the genre.

The Gothic tradition began as a subversion of 19th century Romanticism's celebration of the beauty of nature, with the Gothic still celebrating nature, but now featuring an element of terror, celebrating its immense power and chaotic destructiveness, painting nature as the overlap of awesome and awful in their traditional definitions of inspiring—or inflicting—awe. According to Alison Milbank, "the term became a repository for all the emotions and literary effects unacceptable to the dominant Neoclassical virtues of balance, order and rationality."

In this way, nature often embodies the central theme of Gothic fiction: the Sublime, an idea with its roots in religion (i.e. the infinity of the sacred), something abject, humbling, beautiful and alluring that instills a feeling at the center of the Venn diagram of delight, astonishment, and fear, inspired by obscurity, power, privation, vastness, and hardship—all of which Thomas Wake and Ephraim Winslow experience in The Lighthouse.

These two men are charged with caring for and operating the eponymous lighthouse, which is isolated on an island in the middle of the ocean. One of the first things we see during the course of their stay is Wake in the lighthouse, almost worshiping the light within, treating it as something sacred, and Winslow dreaming that he's wading out into the sea, drawn to what appears to be a shipwreck with a mermaid at its center, wading too deep and getting pulled underwater. These two early scenes establish the lighthouse and the ocean as sources of the Sublime: Wake and Winslow are simultaneously drawn to and repulsed by them. Wake is drawn to the power of the lighthouse, but feels it will be too much for Winslow to handle, knows the danger it holds; Winslow is drawn to the water, but finds only death there.

But the real moment of Gothic Sublimity comes at the center of the film. Wake has told Winslow that you shouldn't mistreat sea birds because they contain the souls of the deceased, but there's a gull that's been tormenting Winslow, and one morning in a fit of rage he kills it. The scene cuts immediately to a weather vane changing direction: a storm is coming, a storm so impossibly violent that it prevents any further ships from landing, trapping these two men together with nothing but each other, the lighthouse, and the sea. It is nature as an abstract monster tormenting the island—and if that wasn't clear enough on its own, Winslow finds a mermaid washed up on shore the next day, an actual monster to accompany the metaphorical one. 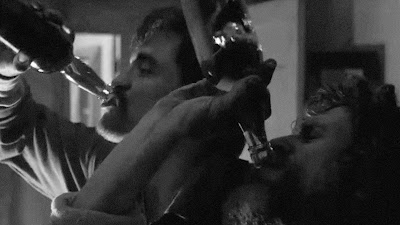 The storm destroys their primary rations, and the backup rations turn out to be nothing but alcohol, so the two men do the only thing left for them to do: become wildly intoxicated. During one of their drunken benders, Winslow confesses that his actual name is Thomas Howard and that he assumed his new name when his old boss, the real Ephraim Winslow, a man whom Thomas Howard desperately hated, died in an accident that Howard either caused or did nothing to prevent—either way, he now feels guilty about this death, as if he murdered the man himself. This clarifies his earlier violence toward the seagull: Howard is repeating the violence he either wished or directly enacted upon Ephraim Winslow.

Alright friends, hold your breath and get ready for some block quotes. In The Gothic and the Sublime, Andrew Smith explains the nature of the Sublime and its relation to the unconscious:


"In the sublime the subject is threatened with annihilation in ways which directly correspond to how the Gothic subject is precariously posed on thresholds between the human and inhuman, sanity and insanity, and conscious and unconscious."

The storm at the lighthouse brings Wake and Howard to the precipice of their humanity, and by so doing it brings them to the brink of their conscious minds. This idea of the Sublime taking us to the edge of our sanity is expanded upon by David B. Morris in Gothic Sublimity, where he uses Freudian psychoanalysis to extrapolate how this inherent nature of the Sublime reveals our repressed desire:


"In its excessive violations of the excess sense, Gothic sublimity demonstrates the possibilities of terror in opening the mind to its own hidden and irrational powers. It is a version of the sublime which demands a psychology adequate to Freud's belief that the ego is not master in its own house.… [A]ccording to Freud, … the uncanny achieves its strange and disquieting power by confronting us with a part of ourselves which we have denied and disowned, but which we can never entirely expunge or escape. The terror of the uncanny is released as we encounter the disguised and distorted but inalienable images of our own repressed desire. For Freud, such uncanny images inspire the same mixture of attraction and revulsion which is the fundamental law of Gothic emotion.... Borrowing Freud's language, we might describe Gothic sublimity as drawing its deepest terrors from a return of the repressed."

Through Freudian logic, we begin to see the way in which the Gothic Sublime is a means of confronting that which is psychologically buried. The Sublime has within it an element of the unconscious; it resides on the border between conscious and unconscious, so a confrontation with it is necessarily a confrontation with repressed desires, the deepest terror of which is a return of the repressed. 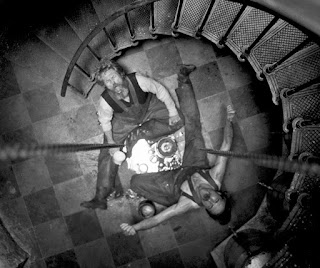 Howard first encounters this boundary between conscious and unconscious desire when he kills the seagull: his conscious desire is to rid himself of this minor annoyance, but the brutality with which he decimates the bird betrays something deeper, unearths his unconscious desire to murder his old boss Winslow. But he's not a lost cause yet; where he goes from here determines whether he'll be able to survive this psychological baggage. The bird is a symbol: through Wake's mythology about gulls containing the souls of the deceased, killing the bird is a direct symbolic reenactment of the real Ephraim Winslow's death (if the bird contained his soul, he is now performing the deed he only wished to perform before). But while this initial return of the repressed triggers the storm, nature in the form of the Gothic Sublime, now he must attempt to weather this tempest of the unconscious. The true return of the repressed comes later.

As Howard descends further into madness and intoxication, he and Wake find themselves increasingly at each other's throats, and eventually Howard begins contemplating Wake's murder. He fails at first, but merely the attempt was enough to change something symbolically: Howard is getting worse, not better, and after this failed attempt, metaphorically triggered by it, the storm gets so bad that it bursts in through the boarded windows, flooding the living quarters of the lighthouse.

This flood washes up Wake's logbook, which reveals that Wake was planning on throwing Howard under the bus, blaming him for everything that went wrong and recommending severance without pay. This puts Howard over the edge and he attacks Wake, while images of Wake as a sea monster, the mermaid that washed up on shore, and Howard's old boss Winslow, flash across the screen. This is the thematic center of the film. This moment aligns Wake (the antagonist), the mermaid (a symbol of monstrous nature and therefore of the Sublime), and Winslow (a representation of Howard's repressed desire). Wake is the monster is Winslow; the antagonist is the Sublime is the unconscious. 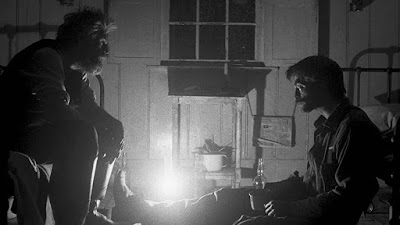 And what does it all mean? Well, for Howard, who proceeds to kill Wake in reaction to this revelation, it means that his encounter with his unconscious desire in the form of the Gothic Sublime and the concomitant return of the repressed was too much for him to handle. He repeats his transgression, reinforcing his repression, and he is punished for this in the most appropriate way possible: he is eaten by seagulls, both the symbol of his original trauma (embodying Winslow through Wake's mythology) and the victim of his initial return of the repressed. He is killed by his own guilt, by his trauma made manifest.

Smith A. (2000) The Gothic and the Sublime. In: Gothic Radicalism. Palgrave Macmillan, London.

Some fun quotes I didn't use but I typed them out myself so by golly I'm not just gonna just delete them:

"[The uncanny] is in reality nothing new or alien, but something which is familiar and old-established in the mind and which has become alienated from it only through the process of repression." (Freud)
2019 desire essay Freud genre gothic guilt horror psychoanalysis repression return of the repressed robert eggers sublime the lighthouse trauma unconscious