Institutional repression and the impossibility of feminism within patriarchal social structures.

It's no accident that The Witch opens in a courthouse dominated by three men who banish the central family from town, justifying their actions in vaguely religious terminology. They are the force that looms over this film. The family is then forced to make a home for themselves on the outskirts of town, at which point Thomasin, the eldest daughter, loses their youngest baby. She knows that the baby was taken by a witch, and the audience knows this as well (the film isn't shy about showing the witch bathing in the infant's blood), but nobody believes her. Thus begins her struggle against the suspicion of others, away from the impotence imposed on her by society, and toward her own ethical agency.

I think expectations are going to be tricky for this film more than other similar genre fare. I would definitely call it a horror film in the sense that I can't recommend it to my queasy, faint-hearted family and coworkers. It contains brief instances of disturbing imagery and a few momentary scares, and if you fall into the world the film creates, the overall experience of watching it is tense and emotionally difficult. This is a film that's not afraid to show young children die, and the way it goes about examining these destructive characters can be psychologically exhausting. But, on the other hand, if you go into this film as a seasoned horror veteran *expecting* this sort of gore and frightening material, then there might not be enough of it here for you.

The Witch has more in common with the work of Ingmar Bergman than it does with James Wan. It is certainly a horror film in the sense that its content will likely displease certain audiences (I can't imagine showing it to anyone who disliked horror films), but that content isn't the focus. Instead, it's much more about the characters' crisis of faith and their struggle within the confines of a restrictive society. Not only are they kicked out of their homes for religious reasons, like Job they constantly face the question of why the righteous must suffer. They feel they're being punished for sins they don't understand, and without this structure to guide their actions they start to turn on each other.

As a result, the film is not simply about crisis of faith in the religious sense (they struggle to believe in God when they're faced with so much hardship): it also slowly turns into a film about crisis of faith in humanity. When nobody believes her story about the baby's disappearance, Thomasin begins to feel that her entire family has it in for her. The two youngest children don't listen to her when they're supposed to, her mother suspects her of everything that goes wrong, and then her father doesn't come to her aid in a moment of grief. And with her world restricted to these few family members, she has no retreat from the onslaught of their suspicion. All of humanity seems hell-bent against her. 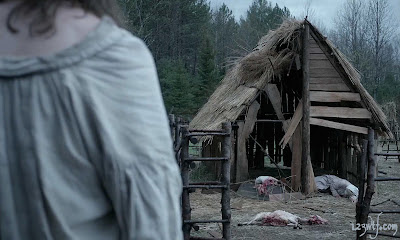 This paranoia is built not only on the question of religion and the innate goodness (or evil) of humanity, but also on the question of sexuality. There's never any doubt about whether Thomasin's brother is the witch tormenting the family, but Thomasin has to defend herself at almost every turn. There is no option left for her except to be repressed or to be presumed a witch. This is the effect of social norms and the unconscious assumptions of the masses. The witch is not the enemy. She's the inciting incident, but everything else is caused by the characters' reaction to her. The true force of evil alienating humanity against itself is not the witch herself, but the ideology which created her.