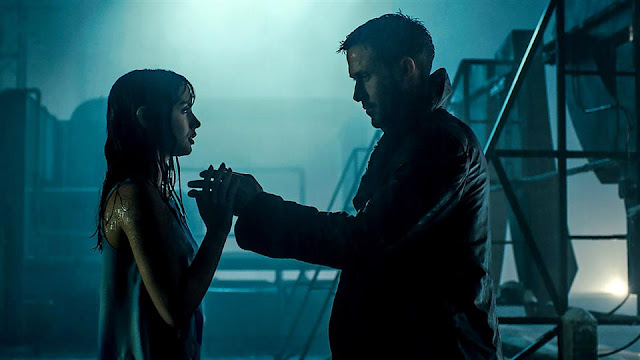 "Dying for the right cause is the most human thing we can do."

But what is the difference between symbolic humanity and non-symbolic, "real" humanity? Where is the line separating real from symbolic? Who gets to draw it? Who decides who gets a soul? When Robin Wright and Ryan Gosling talk about the possibility for a replicant to have a child, she says that there's a wall separating authentic humanity from artificial humanity, but she knows that it's not real, that really there is no wall, that the wall is a fiction invented to make people feel safe and secure in their identity.

"The world is built in a wall that separates kind. Tell either side there's no wall, you've bought a war. Or a slaughter. Am I the only one who can see the fucking sunrise here? This breaks the world, K!"

The "I want to be real for you" love scene is still one of the most phenomenally interesting scenes in modern cinema for all these reasons and more. It's simultaneously touching and unsettling, heartwarming and eerie, tender and cold. Both of these symbolic representations of humanity are insecure about their own reality; Ryan Gosling tells Ana de Armas "You are real for me," but she's afraid that it's not enough. She thinks that what makes someone real is the ability to give life or the ability to lose it, but what actually makes her real is that he treats her as real, that he asks her if she wants a coffee even though they both know she can't drink it.