So I'm going to do something today that I don't normally do which is talk about television. Reviewing or analyzing television is problematic for me because I have a hard time bridging the gap between the microscopic (individual episodes with their brief but contained themes/etc.) and the macroscopic (entire series with different writers/directors shaping each episode). This means I usually stick to one or the other, and today I'm focusing on the microscopic: a single (my favorite) episode of The Simpsons called "Mr. Lisa Goes To Washington" (season 3, episode 2).*

Just to be clear before I start, yes I am fully aware that this episode is a reference to Frank Capra's Mr. Smith Goes To Washington, but no I am not going to compare the two. The reference is obvious and not at all what makes this episode great. Instead I'm going to be analyzing this episode's relationship to ideology and politics using some basic Zizek and Althusser, and then I'll probably make some unsupported, totalizing claims about ideology and politics afterward.

First of all, we need some baseline information on what happens in the episode. Inspired by an advertisement in Reading Digest, Lisa decides to write an essay for a competition in order to try to win a trip to Washington DC. Lisa wins, but while in Washington she witnesses a corrupt politician accepting a bribe. She writes a new essay criticizing this corruption which causes everyone in Washington to attempt to fix the situation. An FBI sting is sent to the politician and he is impeached. Lisa learns about this and regains her faith in the democratic system.

Assuming I haven't thought this through already and this is my first exposure to this episode, there seems to be a pretty readily available critique of politics. Lisa thinks at the beginning that the political system exists to make the world a better place, she finds out it doesn't, and she fixes the situation. Politics is corrupt but we can fix it. The way the government is presented seems at first to support this thesis. In one scene, a plan for deforestation is presented in an overtly ironic way with the forest creatures apparently glad to have their home destroyed. In another, politicians morph into fat cats with cigars and greedy pigs eating money from a trough. 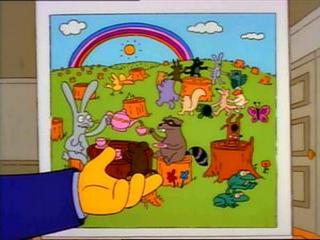 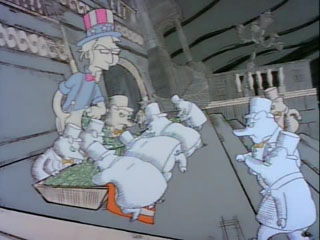 (Be warned: here I will repeatedly and unironically use the term "the system" to refer to the political apparatus in general. Please forgive me.)

As we all know (especially in the realm of ideology) appearances can be deceiving. The flaw with this reading is that it ignores one fact of ideology which Althusser and Zizek both clearly state: that the functioning of ideology depends on precisely this sort of minor resistance in order to function properly. As Zizek argues**, “the stepping out of (what we experience as) ideology is the very form of our enslavement to it”. Lisa's loss of faith in (American) democracy provides an opportunity for that very political system to reinscribe its ideology in the subject, embodied perfectly in Lisa's comical exclamation, "The system works!"

Lisa's transgression is short-lived and causes no real change to the system, and the small change she does cause in fact makes the system stronger. So what is it I like so much about the episode? If we zoom out and look at the episode itself as a politically and ideologically transgressive action things become more clear.

To see what we're aiming for, here's how Zizek describes the task of ideological critique (same citation as previous):

Herein lies one of the tasks of the 'postmodern' critique of ideology: to designate the elements within an existing social order which—in the guise of 'fiction', that is, of 'Utopian' narratives of possible but failed alternative histories—point towards the system's antagonistic character, and thus 'estrange' us to the self-evidence of its established identity.


Because direct attempts to subvert ideology are basically impossible due to its to reappropriate subversion as support we must—"in the guise of 'fiction'"—constantly highlight the system's flaws in order to "estrange" ourselves from it. How does "Mr. Lisa Goes To Washington" do this?

In short, by parodying typical attempts at reform which (like Lisa's) at best cause only minor changes which actually reinforce the system's strength. So, basically by parodying Mr. Smith Goes To Washington (sorry Frank Capra, I love It Happened One Night, but a lot of your movies are pretty ideological). There are tons of little details in the episode that exemplify its satirical attitude (such as the previous ironies mentioned above) and you kind of have to watch it to catch them all, so here are my two favorites. 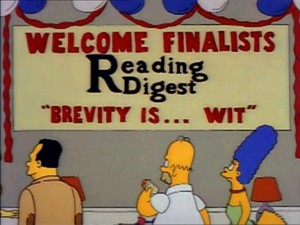 The first has to do with the advertisement in Reading Digest. Not only is it wonderfully ironic that Lisa saved the political system from its own flaws because of an advertisement, but the ad itself called for only essays that are "fiercely pro-American." This wonderfully shows how different ideological apparatuses support each other and the dominant ideology in general (ideology in the form of consumable media supports ideology in the form of government and politics). The call for only patriotic essays also reveals ideology's constant worry about its own lack of substance: "tell me what you love about me because I can't figure it out". 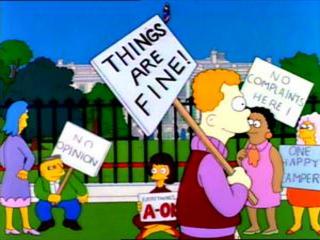 Finally, my absolute favorite part of the episode lasts on screen for less than two seconds (unless you pause it) and is pictured above. These protesters recognize that resistance to ideology actually feeds it instead of subverting it and have decided instead to protest the fact that "things are fine" and "everything's A-OK". Nothing can be done to end this (admittedly silly) kind of protest, so it acts as a blind spot for ideology. Also, if we take this moment in context with the rest of the episode we can see a deeper meaning. The fact that "things are fine" is in fact a problem because what keeps happening is that the small protests (in the form of Lisa's exposure of corruption) are reappropriated by ideology to strengthen it at its weak points. We see that the corruption is fixed and we are happy despite the larger, more important problems with the system.


*For an example of me attempting to analyze a show on a macroscopic level, check out my essay on the BBC's Sherlock.