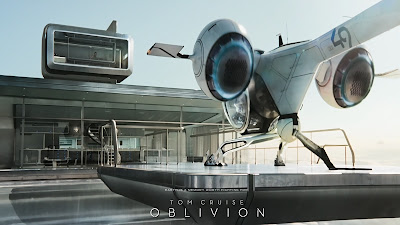 Before we get going here I'd just like to say in the interest of full disclosure that I actually like Tom Cruise. I don't just not dislike him like the rest of the world seems to, I fully enjoy most of the roles I've seen him play. If you don't like Tom Cruise because he's a crazy nutjob scientologist or whatever you should probably get your head straight. Being a crazy nutjob of any variety doesn't make you a bad actor (just kidding I understand that it can be distracting even if I don't empathize). If you don't like him because you don't think he's a good actor then I guess that's too bad and you might not like Oblivion as much as I did (also you're wrong and I hate you)

In case either you've been living under a rock or you don't obsessively watch trailers for new movies, Oblivion is Joseph Kosinski's (director of Tron: Legacy) newest project. Oblivion got a lot of people excited because (from what I understand) it's another post-apocalyptic adventure and the trailer was very pretty.

Well the trailer definitely doesn't lie: the movie is incredibly stylish, well shot, and artistically creative. It's sort of like a grown-up version of Wall-E (don't get me wrong, I love Wall-E, but as a kids' movie it does have its limits) crossed with Independence Day and a splash of The Matrix (not the virtual reality part). By employing strategic New York landmarks the movie does a great job of making the audience feel transported to a world ravaged by earthquakes, tsunamis, and nuclear missiles. Also, the Scavengers (the bad guys) look really awesome. Since the movie's still in theaters it's difficult to find screencaps but here's some fairly accurate concept art for them.

Where the trailer does lie is in the movie's setup. (Spoilers start here if that's not obvious.) The voiceover tells us that Jack (Tom Cruise) and Victoria (Andrea Riseborough) have been fixing drones which protect fusion generators saving energy for the remaining humans who survived a war with the Scavengers. The real enemy, however, turns out to be the Tet, the space station supposedly holding survivors until their transportation to Titan. The Scavengers, the targets of the drones, are actually the remaining human survivors and all this time Jack has been repairing the drones that kill them. While this reversal is pretty standard fare, Oblivion executes it well and the incredibly stylish setting make it somehow feel fresh.

The reason Oblivion isn't just your average fun and stylish summer blockbuster hinges on the movie's relationship to ideology. At its basics the film tells the story of a man who manages to extricate himself from ideology and retaliate against it. The movie opens with Jack telling the story of how the world came to be the way it is now: the Scavengers invaded, we used the nukes, we won the battle but lost the planet, and humanity migrated to Titan with the exception of Jack and Victoria who repair drones which defend generators creating energy out of what remains of our oceans. As I already mentioned this story is not true. The only reason it works is because Jack and Victoria had their memory wiped (something originally viewed as a mercy maneuver so they wouldn't remember all the people they knew that died). When jack is exposed to evidence that the story may not be true and asks Victoria if she has any memories, she responds, "It's our job not to remember."

Regardless of its truth value, the story basically takes the place of ideology: it motivates Jack and Victoria and helps them to understand the traumatic world they live in while conveniently keeping them blind to what they're actually doing (repairing drones programmed to kill humans). After Jack is captured by the Scavengers and learns they're actually humans, he begins a quest to find the truth and extract himself from the ideology of the Tet (in this light the Tet is a stand-in for the ruling power, which is perhaps the reason Kosinski decided to forgo any actual aliens).

There are some really juicy twists in this act of the movie of the sort M. Night Shyamalan only wishes he could've come up with. Not only are Jack and Victoria fighting for the wrong side, but they're actually clones of the original Jack and Victoria and there are many others doing exactly the same thing. They're kept apart by "radiation zones", areas they're told are deadly because of nuclear fallout and stuff. The original Jack and Victoria were pilot and copilot of the space shuttle that discovered the Tet which presumably abducted them, cloned them, and sent them back to Earth to destroy all humans. It's all really enjoyable, but hopefully you already knew that and aren't having all of this spoiled to you with my boring words.

Anyway, eventually Jack escapes ideology, has a traumatic encounter with the Real (which is coincidentally too traumatic for Victoria who refuses to believe), becomes a politicized subject, and vows to destroy the Tet. For this portrayal of ideological illusion and then disillusionment Oblivion gets 5 Zizeks but loses one for its annoyingly traditional gender roles and sappy, utopian ending.

On the enjoyment end of things, Oblivion gets all 5 Beers since honestly I had a hard time not just going to see it again tonight instead of writing this. It's an excellent mix of exposition and action with enough romance for it to have a stereotypically happy ending. If you like sci-fi and don't hate Tom Cruise then go see it, especially if you can catch it before it leaves theaters (also apparently you can see it in IMAX which I would definitely recommend although I don't have that opportunity myself).