Knowing full well that this will trap me forever in the category of People Who Like Weird Movies (if my Videodrome analysis didn't do that already) I would just like to say that I think 2007's Teeth is a very very good movie. I'm going to put it all on the table here. The most potentially disturbing imagery the movie has to offer is three severed penises, two bloody stumps, and some amputated gynecologist fingers (just try not to click those links, I dare you). It's really not that hard to watch. Sure, a dog eats its owner's detached manhood, but if you watch the movie he really had it coming (sorry for the uncomfortable pun) and the scene ends up feeling funny rather than frightening.

If you can make it through those few brief moments you should really watch this movie immediately because they're the only things "holding it back" from being required reading. Plus I went through and made all those screencaps myself and I haven't had any nightmares about my penis getting chopped off (at least not any more frequently than normal). I even did it while eating lunch. Okay, so, maybe I am the weird one, but that's not the point. The point is this movie isn't Saw; if anything, Teeth is more like Carrie.

Admittedly I went into Teeth imagining I was in for an hour and a half of what most people probably expect from a film about vagina dentata: male fear-fantasy about the dangers of female desire. The story goes like this: women are these crazy things that want to have sex with us (men) and what's up with that? We're all ugly, hairy, and smelly. Why would anything want to have sex with us? They must have some secret agenda. Teeth in their vaginas! Of course!

(Sorry I needed that .gif in here somewhere)

I'm a little embarrassed for assuming that's what the movie was going to be like, especially because it's really so much better. Let's find out why.

The most important change the movie makes to the traditional folklore is that of perspective. We experience the movie through Dawn instead of a paranoid male sex addict, giving the traditional misogynist tale a wonderfully feminist spin. This is why putting the first line of Kirk Honeycutt's review of the movie on the DVD cover is somewhat misleading. This movie only serves as a cautionary tale for men who objectify women or think that rape might be fun. His third sentence, while lacking the zing of the first, is a much better description of what watching the movie is actually like: "Mitchell Lichtenstein's female revenge tale can't quite decide whether it wants to be a comedy, horror flick or social satire so it does all these things." And it does them all well.

What's funny about vagina dentata you ask? While part of the humor doubtlessly comes from the so-called "artlessness" of the presentation, there are some genuinely hilarious moments. In one of my favorites, Dawn thinks she finally found someone she's able to have sex with without neutering them. In the middle of the act, however, she learns that he's doing it because of a bet he and his friends made. Noticing that he's suddenly in extreme pain, Dawn realizes that she just castrated him (she eventually discovers it only happens when she feels pain or discomfort) and the look of disappointment on her face is just so perfect, like "aw shucks, not again." 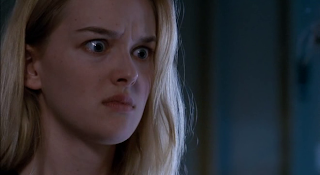 The real reason you need to watch this movie, however, is for the social satire. The entire reason Dawn is unaware and even afraid of her own vagina is because of her existence within a prohibitive, conservative Christian community. Here we can return to the parallel I mentioned earlier with Brian De Palma's Carrie. Both Carrie and Dawn just want to know what's going on in their pants, but the mother (in Carrie) and society (in Teeth) tell them that it's inappropriate to want to know the basics of human anatomy. In Biology class, the picture of female genitalia is covered with a big shiny sticker (the male genitalia is left exposed of course). Both movies are fundamentally just (satirical) tales of coming of age in repressive societies.

Moreover, Teeth takes the satire further than Carrie by exposing the hypocrisy of these societies. The same community that won't teach women about their reproductive organs expects them to deal with situations like being trapped in a car with a stranger who is going to have sex with you one way or another. This is why I love Teeth so much. You spend the whole movie with Dawn as she turns what was confusing and terrifying into both armor and weapon. She uses her newly found power to avenge her mother's death and punish the aforementioned car-bound rapist. Dawn ends up being one of the strongest female leads the horror genre has seen since Silence of the Lambs.

Well, if you made it to the end thanks for bearing with me. I promise I'll review something normal next.