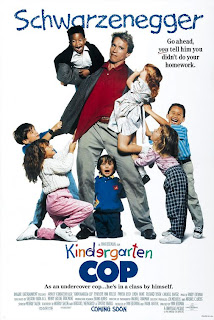 As most of you (with the exception of a few close friends) probably don't know, I'm preparing to make a segmented top 10-style post of movies from my childhood. While researching this subject, I rediscovered this movie (which did not make the cut) so here are some of my thoughts on 1990's Kindergarten Cop:

For those who haven't seen it and enjoy watching the gigantic hulk that is Arnold Schwarzenegger on screen, Kindergarten Cop might be the movie for you. It's not an action movie if that wasn't obvious from the title, and is more of a children's comedy in the vein of Jingle All The Way (1996) than an action-packed Terminator sequel. Coming back to it after more than ten years, I was pleasantly surprised with how entertaining revisiting this was. Now when I see things like The Pacifier (2005) in theaters I assume they'll be total garbage, and if this came out today I imagine I'd assume the same thing. This movie, while far from perfect, entertained me more than I expected.

One great thing about Kindergarten Cop is Arnold's... unique acting style. Seriously though, I can't tell if he's being ridiculous on purpose (probably) or if his inexperience in comedy roles naturally creates ridiculousness (probably not). In any case, the situations this movie puts Arnold in generated some of the best lines from this now aging action star outside of True Lies (or Batman & Robin if you happen to enjoy the wonderfully terrible puns). Here's a short list: "My name is John Kimble...", "I'm the party pooper.", "You are mine now!", "I'm going to ask you a bunch of questions...", "We're going to play a wonderful game...", "Bring the toy back!", "I'm a cop you idiot!", and my personal favorite, "It's not a tumor!" 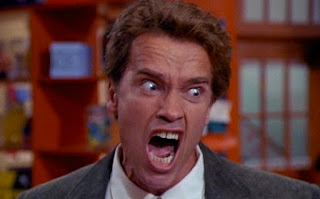 So yeah, if you haven't seen it before here's a basic outline of the plot. John Kimble (Schwarzenegger) is a cop who's been after the criminal Cullen Crisp (Richard Tyson) since forever and catches a break when Crisp kills an informant but leaves a witness. Unfortunately the witness isn't enough to convict Crisp (she's some sort of drug addict) so Kimble must find Crisp's ex-wife in Astoria, and of course the most logical method is for Arnold to become an undercover kindergarten teacher (it's slightly more complicated—he's given a partner who has a background in teaching but falls ill on the first day of class—but I'm not simplifying much). Arnold finds the ex-wife, but Crisp's mother (an amazing performance from Carroll Baker) gets the witness keeping Crisp in custody to overdose causing Crisp to be released. There's a climactic confrontation and, well, you can guess what happens from here.

But all is not well in Astoria. I have two problems with this movie and, as usual, neither of them have to do with the acting, cinematography, or anything traditional filmgoers look for, so I won't be offended if you stop reading now. I just find this sort of thing interesting. (Also if I haven't spoiled the movie yet I'm probably going to in what follows.)

My first (and more minor) issue with Kindergarten Cop is located in the progression of Arnold's character. Recently I've been inspired by Todd McGowan's essay "The Temporality of the Real" to look for characters who are on a path either to or from politics (usually caused by a love interest of sorts). Arnold here embodies the latter. He begins as a cop hell-bent on catching his mark and ends as a kindergarten teacher with a new girlfriend. His love for the woman and for his students drives him away from politics, and in this way desire trumps drive (desire isn't necessarily bad in itself, but it is when it pulls the subject away from what is good). While Arnold is given a police whistle at the end of the film which sort of attempts to signify the continuation of his drive, it instead functions as more of an indication of his own handicap (the only way he manages to control the children is with police-like drills).

My second criticism is slightly more nuanced and, in my completely twisted sense of humor, totally hilarious (based loosely on Zizek's reading of The Birds). Carroll Baker's character Eleanor Crisp, the mother of the criminal Arnold's after, is incredibly overbearing towards her son and in this way embodies the maternal superego (in short, she's willing to hinder her son's enjoyment in order to fulfill her own—she enjoys at his expense—but she does this because she cares about him too much). In itself this isn't problematic (well it is, but not for an evil character), and in fact creates an excellent villainous character. The problem is that Eleanor finds a parallel in her son's ex-wife Rachel Crisp (unwittingly played by Penelope Ann Miller). Rachel (who changed her name to Joyce after running away) exhibits the same sort of domineering love towards her son that Eleanor does towards hers, and as a heroine that's not a good thing. Her care for her son makes a bit more sense because he's so young, but the parallel's still there and is still disturbing/hilarious.

Overall I'm giving Kindergarten Cop four beers for being surprisingly enjoyable and two Zizeks for being theoretically reprehensible but at the same time offering an unexpected amount of material for theoretical analysis.