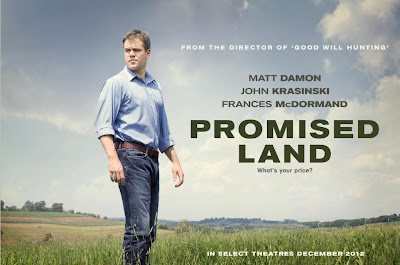 On a flight back from my grandparents' house I was able to watch The Promised Land, Gus Van Sant's latest feature film, which was really a privilege for me since I don't normally shell out for movies on airplanes (the airline comped the film due to the flight being delayed). I had no expectations going into it beyond the fact that I had already seen Despicable Me and the trailer looked better than the one for Identity Thief. That said, I'm torn about The Promised Land.

Matt Damon and Frances McDormand play salespeople working for Global Crosspower Solutions, a company trying to obtain rights to drill for natural gas through a process called hydraulic fracturing, or fracking. Steve Butler (Damon) and Sue Thomason (McDormand) are sent to a rural town in Pennsylvania thinking that their ability to offer thousands of dollars to the relatively poor community will make this an easy sell. The arrival of Dustin Noble (John Krasinski), an environmentalist, quickly complicates matters for the pair as he exposes the potential downsides of fracking.

The acting here is great. Damon shows both emotional depth and breadth when forced to question his assumptions and it was really enjoyable for me to see Krasinski get out of The Office. The problem I had with The Promised Land came not from the cast but from the plot. Movies like this that attempt to tackle a political issue in a dramatic (as opposed to documentary) format have the dual problem of not dealing with the issue in enough factual depth to be convincing and sacrificing dramatic intensity for the sake of making a point. For this reason I want to compare The Promised Land to another politically-minded drama from last year, Zero Dark Thirty*.

The Promised Land is both better and worse than Zero Dark Thirty, so let's start with the bad news first. Obviously some people are going to be drawn to these movies because of the political issue they attempt to confront, but this is not what makes them good movies. This is what makes them topical, it's their setting, and the misconception that the political issue is part of their content is what frustrates me about them. While making a dramatic film about politics can be a good way to raise public awareness, it often seems to distract the filmmaker from actually making a good movie.

If you remove the political backdrop from these films you're left with the substance of the movie, and this is the first place The Promised Land and Zero Dark Thirty differ. The latter is an absorbing political drama with a phenomenal heroine and an exciting climax with only the minor problem of being slightly drawn out and lagging in the middle. The former is a dull and predictable story about a rising businessman sent to a rural neighborhood where he meets the people he's been profiting off of (including, of course, an attractive female) and is forced to question the choices he made to get where he is.

The good news? Where Zero Dark Thirty fails in its portrayal of politics and ideology, The Promised Land, at least to some extent, succeeds. I'm about to spoil the major plot twist, so turn back now if that sort of thing is going to bother you (this is the last point I'm going to talk about). While in Zero Dark Thirty ideology is limited to the other (they're ideological, not us), The Promised Land acknowledges the very important lesson that ideology often appears as its opposite.

Steve Butler's attempts to convince the rural townsfolk to sign the rights to their land away are initially thwarted upon the arrival of Dustin Noble, a self-proclaimed small-town environmentalist. Noble explains that he signed his land away to Global and the fracking destroyed it. He carries around a picture of dead cows on desiccated farmland warning that this is what happened to him and it will happen to them too. Just as all hope for Butler seems lost, however, a package arrives exposing the picture as a fake and Butler's victory seems certain.

Then the twist comes: just as Noble is leaving, Butler confronts him and Noble accidentally lets slip that he was working for Global all along. In order to ensure their total control over the outcome, Global played both sides of the debate. This is how ideology functions, not by literally playing both sides of debates but by masquerading as the good guy, as the rural farmer whose business was ruined by the big corporate machine. While the film itself is slightly ideological in this same way (it's the good guy fighting against the dangers of natural gas—there is a counter-argument offered, but it's eclipsed by the time the credits roll) I love that it attempts to get the audience thinking in the right way.