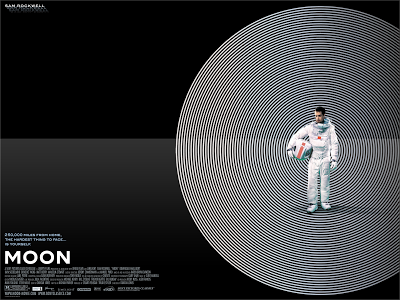 I'm on a bit of a sci-fi kick recently, so when I heard this year's Oblivion being compared to 2009's Moon I had to give it a shot. While Oblivion is undoubtedly more exciting, it's also trying to be, which is something that I wouldn't say about Moon. Whereas Oblivion is a solid 5 beer movie since it has lots of fight scenes and chase scenes and explosions and stuff, Moon clocks in a little lower since the pacing is a bit slower and there are significantly fewer things that go boom. That said, I liked Moon more than Oblivion for two very specific reasons.

The first reason is Sam, both Sam Rockwell (the actor) and Sam Bell (the character he plays). Sam Bell is an astronaut living on the Moon mining Helium 3, a resource that the introduction tells us has replaced basically all other energy sources on Earth. Sam lives a lonely life, however, as he is the only one necessary to run the operation, and the solitude is beginning to take its toll. The hallucination engine kicks on and Sam accidentally crashes into one of the mining rigs. And that's about all I can tell you without edging in on the spoilers (don't worry I'll do that later). The twist in Moon comes unusually early (about half an hour in) and what this does is center the film's climax not around a plot twist (what Oblivion and a large portion of other summer blockbusters do) but around character interaction and development. In this way Moon is structured in a way directly opposite that of Now You See Me: where that movie is almost purely plot-driven, Moon is almost purely character-driven.

This is where Sam comes in. Sam Rockwell, with a little help from the voice of Kevin Spacey (voicing the obligatory robot GERTY), has to carry this entire movie. Go look at the cast if you like (there is a spoiler on the IMDb one though so be careful). There's literally 11 people credited for acting in this movie, one of whom is Mary Tyler Moore for the one scene where Sam watches the Mary Tyler Moore Show. Sam receives video messages from his wife and daughter as well as from two men who represent the company he works for and that's about it. Sam Rockwell pulls an amazing amount of emotional weight especially considering what he has to do to pull off the twist, and even the twist itself seems more geared towards furthering character development than for surprising the audience. Sam Bell will stick with you, Jack Harper is a fleeting image.


Kevin Spacey also does a great job as the voice of GERTY, a pretty barefaced homage to 2001's HAL with one rather large difference: GERTY isn't evil. As he says in his comforting voice, “I'm here to help you, Sam.” And he does. He even asks if Sam wants hot sauce for his beans. He encourages Sam to eat when on multiple occasions he has failed to do so for several hours. He cuts Sam's hair. I love GERTY, but I also know that the first time I watched Moon I was just waiting for him to snap and start trying to kill Sam (or at least lock him outside). I don't know if Moon does this on purpose or not but it was definitely refreshing to see a computer that wasn't trying to kill its human counterpart.

GERTY isn't the only homage to the all-powerful 2001: A Space Odyssey though. The space architect who built the interiors in that movie seems to also have been contracted to build Sam's house in Moon. Everything is white and clean, which creates a somewhat ominous tone for the film. This is enhanced by the general solitude of the station as well as my second reason for loving this movie (you thought I forgot didn't you) which is...

The soundtrack. Yep. It's pretty rare for me that one of the main reasons I like a movie is the soundtrack (even Tron: Legacy had so many other more important reasons) since even if I like the music it's not usually important enough to make the cut, but Moon's is truly exceptional. Like the movie itself it's minimalist, eerie, slightly empowering, and enormously haunting. In such a small movie it's important for each element to do its part and the soundtrack here creates the perfect atmosphere.


That's as far as I can take you without giving away spoilers, so if you haven't seen the film yet feel free to skip down to the rating or just plain stop reading or whatever. Your choice. There's not much left, I just couldn't avoid a few more talking points.

So the twist is that Sam is actually a clone and there are like a bazillion more Sam clones waiting to be woken up in a secret room under the base. While this obviously isn't the most original twist it's also not trying to be. Part of what I love about Moon is that it doesn't try to beat its audience over the head with how cool and special its twist is (Inception). It simply uses the twist as a tool to further its exploration of human nature and identity and all that. Additionally there are two phenomenal teasers that foreshadow this turn. In the first scene Sam is wearing a shirt that says “Wake me when it's quitting time”. Originally seen perhaps as a sort of “work now, play later” mantra, we eventually learn every clone is given one and it functions instead as a funny little reminder to GERTY to wake up a new clone when the previous one "quits". The second little hint is Sam's alarm clock which plays the Chesney Hawkes hit The One and Only (“I am the one and only”). Sorry Sam, but you're not.

The last thing I want to mention about this movie is its politics. For a movie with such a clear message it's amazing how infrequently it comes up. Helium 3, the resource Sam is mining, is hailed in an advertisement that plays at the beginning of the movie as the solution to “dirty” energy (fossil fuels, etc.). Helium 3 is great because it's infinitely renewable and doesn't burn a hole in the ozone layer. But the revelation of Sam's apparently pointless suffering over his three year contract (he doesn't get to go home, he's not even who he thinks he is) shows how yet again energy companies are interested only in profit despite their outward message of environmental consciousness. The message isn't necessarily that energy can never be clean, but that it's important to recognize marketing methods for what they are. Whether or not energy will ever be clean, it should always be on our minds. A common message perhaps, but certainly in an uncommon vehicle.