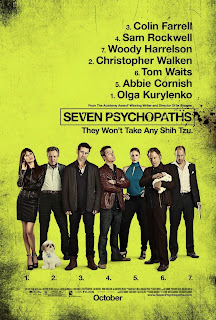 So the first thing that will likely occur to anyone with a functioning brain who watches Seven Psychopaths is that it's an incredibly self-indulgent movie. It's directed by Martin McDonagh (of In Bruges fame, check out my review if you're interested) and is about a character named Marty trying to write a screenplay to a movie called Seven Psychopaths. Yeah. So I feel like that right there could either make or break the movie for you depending on how you feel about that sort of thing. Personally I enjoyed the metatheater (although I usually do). The one thing that bothered me a little about it was that he basically uses Colin Farrell to defend his mediocre female characters (I liked Linda Bright Clay for what it's worth).

If you can get past the potentially pretentious premise and the narrative confusion that it causes (like me) then you should find the movie to be pretty funny. It got some genuine laughs out of me and I don't even really like comedies (although, like In Bruges, this is more of a dark comedy). Christopher Walken as the pacifist psychopath and Sam Rockwell as the [spoilers removed] psychopath really stole the show for me. Christopher Walken's delivery is beyond perfect, and there's this one scene where this happens that just cracks me up. Sam Rockwell's character is both funny and, in a very strange (psychotic?) way, heartwarming. He's a really good friend for Colin Farrell, but in a really odd way. Hopefully Martin McDonagh has a real Sam Rockwell in his life. I know I'd like one.

Final Notes
- This feels a lot like In Bruges in some good ways—the tone and quality of the comedy, the sort of honest, frank vision of humanity—as well as some bad ways—it's also incredibly violent and has a lot of swears (and a lot of the really bad ones). The character development isn't nearly as deep though.
- It seems like Martin McDonagh watched one too many Tarantino films and tried to make one himself, but instead of a masterfully interlaced screenplay what we get is a web with some of its strings held on with tape.
- There aren't even seven psychopaths. I want my money back.