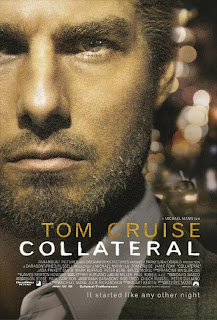 After my last unsuccessful attempt to find a fun action film with Tom Cruise, I decided it was time to revisit Collateral, a movie I hadn't seen since its release in 2004 but which I remembered fondly. I wasn't disappointed.This is easily the best screenplay I've seen from Stuart Beattie (the man responsible for G.I. Joe: The Rise of Cobra as well as the characters in the Pirates of the Caribbean series) as it controls the tension pretty well from start to finish. The characters are enjoyably quirky (Cruise is a pretty friendly and understanding sociopath while Jamie Foxx's cab driver bets his fairs which route will be fastest) instead of the flat caricatures films like this tend to rely on. The characters also work well thanks to phenomenal performances from both Cruise and Foxx as well as a good supporting cast in Mark Ruffalo and Jada Pinkett Smith. The reveals are all perfectly timed so that first you think maybe Cruise's assassin is serving some sort of higher cause, then you realize that he's definitely just a crazy hitman, and finally you realize who his final target is going to be.

There's one conversation between Cruise and Foxx that functions as the takeaway message for the film. Cruise criticizes Foxx for getting stuck in the loop of his daily life, for accepting the monotony and repetition thinking that he's working towards his dream of opening his own limo service. Cruise's comments illustrate an important point from Lacan about how fantasy structures our motivation: we're perfectly willing to endlessly repeat the boredom of our daily routine so long as we have something to look forward to (fantasy/object of desire/objet a) whether we ever get there or not. My problem with Collateral is its solution to this deadlock. Foxx accepts Cruise's assessment of the situation, crashes his taxi, and saves the damsel in distress. In essence, the film's answer to the fantasmatic status of the object of desire is to fully embrace it anyway. It says to stop circling your object of desire and just grab it, not understanding that it's not real and only serves to keep you moving.

Final Notes
- "I read about this guy who gets on the MTA here, dies. Six hours he's riding the subway before anybody notices his corpse doing laps around L.A., people on and off sitting next to him. Nobody notices." Cruise tells Foxx this story the first time they meet, and his last lines reference it, and I just really like it. Illustrates the film's themes or whatever.
- There's a scene where two coyotes cross the road in front of Foxx's taxi that I always found slightly curious and enigmatic. Turns out it wasn't scripted and the coyotes just walked onto the set like they owned the place. Not sure what that "means", just an enjoyable anecdote.
- Javier Bardem plays Cruise's boss Felix and gets about 2 minutes of screen time, which is just enough for him to be a totally intimidating badass. He gives a speech about Santa Claus's helper, Black Peter. It's great.