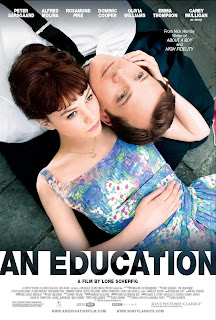 An Education took my expectations and threw them right back in my face. First off, it was recommended by my good friend Evan, a fellow Speed Racer enthusiast and illustrious authority on such sci-fi wonders as Battleship and Dead Snow. Needless to say, we have similar taste in movies. Despite my trust in him I was still thrown for a loop when he recommended this. I thought maybe he saw it with his girlfriend or something and they bonded over what was in reality a rather average romantic comedy. No. This movie is great. Carey Mulligan carries the show from start to finish as the charming, strong and joyfully entertaining Jenny, a teenager reaching the end of what I can only assume is the British equivalent of high school and preparing to apply to the most prestigious university in England: Oxford. One day, she meets the cunning David, played by a devious but alluring Peter Sarsgaard, who shows her that there's more to life than school. Initially her parents (Alfred Molina and Cara Seymour) are wary, but eventually they prove to be just as impressionable as their young daughter. But if you think you know where this is going, you don't. At least I didn't.

An Education isn't particularly mysterious. It isn't one of those movies that has you trying to guess every twist and turn. It's just also not the formulaic period piece romance I expected it to be. And this is both the second and third way it threw my expectations back in my face: An Education is neither the average, replaceable rom-com that are a dime a dozen these days ("romantic movies" are even used to define the idiom), nor is it what I would consider the next generic alternative based on its title (the supposedly worldly but generally ignorant "I can show you the world" movie). The film seduces the audience into thinking they're watching a sophisticated critique of the educational system when really the critique is precisely of that jaded attitude. In short, An Education is not only very well made, but it is a refreshingly original movie (yes, okay, I know it's based on a memoir, but you know what I mean). If you haven't fallen in love with Carey Mulligan yet and are looking for a unique romantic drama then definitely give this one a try.

Final Notes:
- The one issue I had with the movie is the age difference between Mulligan and Sarsgaard. I realize that's part of the point and that the age of consent is different in the UK than in the US, but it still made me vaguely uncomfortable.
- One of the most heartwarming aspects of the film is Jenny's parents. Alfred Molina especially does an amazing job portraying the divided nature all parents with children in school must feel.
- My favorite sort of tangential point the movie makes is in what David does for money (minor spoilers). He helps colored folks move into apartments near old racist ladies who then cheaply sell their apartments to him. Fantastic.