Back to the Future (review) Childhood Favorites Week 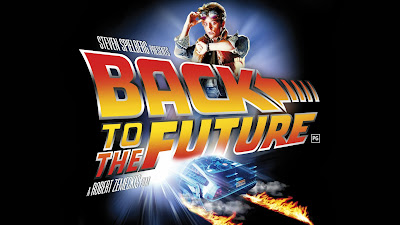 Alright, here we are at day four of my Childhood Favorites Week and I've finally found a movie about which I don't know what to say. It's not that I didn't like it or thought it was boring or something. I really enjoyed rewatching this movie, but the reason why doesn't generate many talking points. Back to the Future is absolutely hilarious. This was easily the funniest movie I've revisited for this project so far. The problem is that I'm terrible at reviewing comedies. I avoid doing it because I have trouble explaining how or why it was funny without spouting a list of quotes which, without their context, aren't really funny anymore (although if you'd like a collection of quotes, here's this image I found). But, for better or for worse, the penultimate review in my Childhood Favorites Week is Robert Zemeckis's Back to the Future (1985).

Marty McFly (Michael J. Fox), a young man with one of the best names in cinema history, lives a fairly average life. He's always late skateboarding to school, he has a girlfriend with an enormous hairdo, you know, typical 80's stuff. One thing sticks out about him, however, and this is something I didn't really notice watching the movie as a youngster: Marty's parents are pretty unhappy with their lives. Marty's dad George (Crispin Glover) is always being pushed around by a man with another great name, his boss Biff (Thomas F. Wilson), and his mom Lorraine (Lea Thompson) drinks Popov with dinner and tells the story of the way she met George with a voice full of regret. Marty is also unique in his choice of friends. He apparently spends most of his time with Doctor Emmett Brown, an aging, eccentric scientist-slash-inventor who claims to have just made a time machine out of a DeLorean.

So Marty goes to check out Doc's time machine where the two are confronted by a group of fairly incompetent Libyans (from which Doc stole the plutonium he needs to power the machine), and in his attempt to escape in the modified DeLorean Marty accidentally travels back in time 30 years. Back in 1955 (remember, the movie was made in 1985) Marty runs into younger versions of both of his parents as well as his dad's current/future boss Biff and Doc Brown (who, coincidentally, looks about the same). After accidentally causing his future mother to fall in love with him, Marty has to get his parents to fall in love again while finding a way to get back to 1985.


So I may not now how to analyze movies like this, but there is one thing I do know. Back to the Future seriously rewards repeat (or at least attentive) viewings. It is absolutely full of little details for you to fall in love with which are unrelated to the film's plot. There are small, seemingly inconsequential things like the movie playing at Marty's local theater in the background of the picture above. In this category I'd also throw things like the time machine's license plate ("OUTATIME"), the fact the Huey Lewis of Huey Lewis and the News (the band which provided a couple of songs for the movie's soundtrack) is on the panel of judges which evaluate Marty's band in the movie's opening scenes, the way Marty retroactively invents skateboarding by dismantling a kid's toy, the name and nationality Marty adopts as the alien sent to reunite his mother and father (the Vulcan Darth Vader), and the fact that Marvin Berry calls his "cousin" about the "new sound he's been looking for" when he hears Marty play Johnny B. Goode. Also maybe the awesome reference to the silent comedy classic Safety Last! (original) in the film's unbelievable opening shot.

Then there are details which, while they may not have a direct bearing on the plot, are mentioned in some way or another in dialogue. The "middle name" of the mayor in both 1985 and 1955 is "progress", Marty's uncle "Jailbird Joey" refuses to leave his crib as a baby, and George's story about how he fell out of a tree "birdwatching" in front of Lorraine's house turns out to be a cover for him being a peeping Tom. My absolute favorite little detail for this category, however, is that the mall where Doc shows Marty the time machine is originally called the Twin Pines Mall, named after the original owner of the land who "had some crazy ideas about breeding pine trees". However, after Marty goes back in time and accidentally runs over one of the two pine trees the owner was breeding, the name of the mall in the future changes to the Lone Pine Mall.

Finally, there's the level of details available in the way different characters are the same in the past and the future and then the way they change after Marty's interference. The most memorable is probably the way that Biff's classic line is repeated verbatim in the past. In 1985, he yells at George for not doing his work for him ("Hello! Anybody home? Think, McFly, think!"), and in 1955 his speech is repeated with the only change being him forcing George to do his schoolwork (here's a pretty good clip, although it includes a little bit from one of the sequels). My personal favorite, however, is when Marty's excuse for not sending his tape to "the record company" ("I just don't think I could take that kind of rejection") is repeated by his father as an excuse for not asking Lorraine out to the Enchantment Under the Sea dance.


As a card-carrying Freudian, I don't think I can write a review of this movie without pointing out one plain and simple fact: this movie relies on latent incestuous tension. Half of the story (the half not about getting Doc to help him with the logistics of getting back to 1985) is about the fact that when Marty went back in time, not only did his (future) mother fall in love with him, but to some extent he also fell in love with his mother. The scene where Marty first meets the younger version of his mother he stumbles around what to say: "You're ho-- you're so ho-- you're so... thin!" Marty struggles with the experience of finding attractive the woman who he knows will become his mother.

This puts a new spin on the way Lorraine (in 1985) disapproved of Marty's girlfriend Jessica: she wants him for herself. This dual tension adds another layer onto Back to the Future's coming-of-age drama. While it deals with George's struggle to stand up for and believe in himself on the one hand, on the other it depicts both sides of the struggle to enter the Symbolic order (Marty must detach himself from his mother and she must detach herself from him). At the same, while it does allude to these themes, it can't fully explore them on account of its PG rating. It does start in the right direction, however.