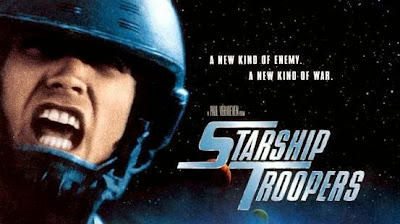 In anticipation of the release of Ender's Game later tonight I want to talk about another famous science fiction film, Paul Verhoeven's Starship Troopers (1997). The similarities between these two movies aren't limited to the fact that they both feature bugs as enemies. Both Starship Troopers the movie and Ender's Game the book function as satires of militarism. The interesting thing is that, depending on who you ask, critics either didn't understand Starship Troopers's satire, or (what I find more likely) understood it but found it lacking or inadequate. Honestly this isn't the most incisive satire I've seen since it tries to keep the tone light (making for a more enjoyable experience), but the critique is there. Would you like to know more?

Well, to start with, Paul Verhoeven has publicly stated that the film is a satire of militarism. In the DVD commentary he remarks that "War makes fascists of us all." So, that's it right? We're done? The man who made the movie says it's a satire, so it must be. The problem with this theory is that if director's intent meant anything then The Wicker Man and Troll 2 would be scary and The Room would be a serious drama. And this phenomenon isn't limited to new or inexperienced directors: David Lynch has made several films (most notably Mulholland Drive and Blue Velvet) which he intended to focus on transcendental meditation but which often make more sense viewed through the lens of psychoanalysis and Lacanian film theory (reference). Kathryn Bigelow has stated that her film Zero Dark Thirty wasn't meant to justify torture despite the fact that it clearly does. However, intent can serve as a starting point and give a clue of what to look for. 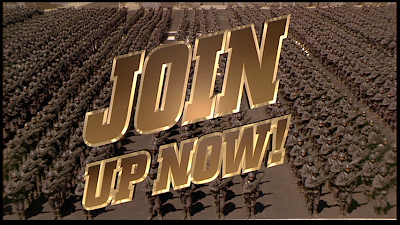 Starship Troopers does seem to make the point that "war makes fascists of us all," but in a strange way. The film is basically dressed up as a Nazi for Halloween. Most notably the costumes imitate Nazi uniforms and the propaganda clips and some other scenes imitate the style and content of Nazi war films and newsreels (reference). Where does this really get us though? What does equating militarism with fascism mean? There's no critique of fascism within simple imitation, and thus no critique of militarism and no satire. At the end of the day they beat the bugs and won the war. It might be militaristic, but the film is telling us it worked. We have to look a little deeper.

Why are we even fighting the bugs? This is an issue brought up in a short scene by a reporter who questions whether the bugs would be attacking us at all if it weren't for our own proclivity for violence. After interviewing some of the mobile infantry, the reporter tells the camera, "Some say the bugs were provoked by the intrusion of humans into their natural habitat, that a live and let live policy is preferable to war with the bugs." He's interrupted by John Rico who says, "Let me tell you something: I'm from Buenos Aires, and I say kill them all!" The reporter gives the camera a knowing look and the scene ends. This interaction highlights the lack of critical thinking on the part of the military and shows that, while we don't often get to see it since the movie is about the military, there are those that oppose the war. 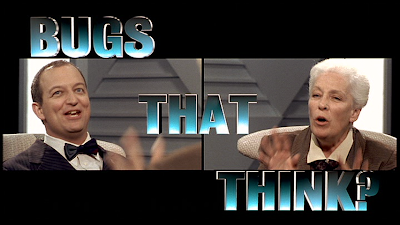 This lack of willingness to even consider the enemy's perspective is repeated later in one of the newsreel clips. In an interview between a scientist and a talk show host, the interviewer refuses to even hear the perspective offered by the scientist. He continually talks over her, saying "Insects with intelligence? Have you ever met one? I can't believe I am hearing this nonsense! This is the most ridiculous conversation I have ever had!" The host's xenophobia outlines the first major aspect of the military ideology under critique in the film.

There is a pervasive "us vs. them" attitude which does not allow for the bugs to become sympathetic. If you think the idea of sympathetic bugs is a bit tenuous let's return briefly to Ender's Game. At the end of the story it becomes apparent that the buggers can think and have feelings just as much as their human enemy. Is the revelation of a brain bug really any different from this? The bugs are clearly intelligent. Combine this with the overwhelming refusal to consider the other's position and we begin to see the contours of Starship Troopers's satire. 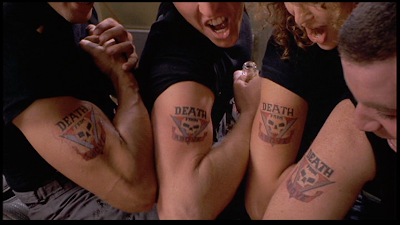 There's another more obvious prong to the film's attack on militarism, one which is perhaps too obvious especially considering the action genre overtones: war makes you violent. I don't just mean violent because you're killing people (or bugs), I mean it makes you accept and eventually praise violence as the solution to every problem. At the beginning of the movie the students' instructor Jean Rasczak tells them violence is "the supreme authority from which all other authority is derived." He continues, "Naked force has resolved more issues throughout history than any other factor. The contrary opinion, that violence never solves anything, is wishful thinking at its worst. People who forget that always pay." He even praises the bombing of Hiroshima as not only acceptable but successful and commendable.

This combination of jingoism and aggressiveness creates a situation where we shoot first and don't ask questions later, where our inevitably violent actions never come under scrutiny, and this more than anything else is the film's criticism. War not only makes you fascist, it makes you stupid, blind, xenophobic, and savage.

Final Notes:
- Special thanks to my good friend Evan for talking through some of this with me.
- I wanted to get this quote in here somehow but I couldn't find a way to make it fit. Michael Voss for the LA Times wrote, "In 'Troopers,' we see only a bunch of dumb kids following dumb leaders into a dumb war that eschews tactical maneuvers in favor of putting the youth of the planet Earth in front of an insect army that's as sure to devour their false hopes and dreams as we in the audience are to yawn in the face of all this stupidity." He means this as a criticism of this film, but I absolutely love it for this reason.
- I made a Tumblr photo set of stills I took for this article, most of which didn't make the final cut despite the fact that they had cool spaceships and stuff in them. Check that out here.
analysis criticism fascism film ideology intent meaning militarism movie Nazi Paul Verhoeven review satire Starship Troopers theory violence xenophobia