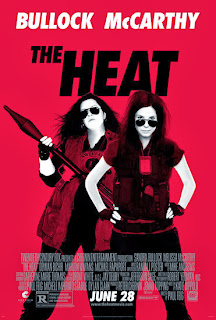 Well, after watching and reviewing Bridesmaids (2011), I felt it was only proper to check out Paul Feig's following movie, The Heat (2013), which happened to also be recommended by my good friend Ben. While I don't think this film is quite as funny as his previous one, it does have its moment and more importantly features some pretty solid action. If you're used to the virtual fireworks display level of explosions in you average action flick, however, you may leave this unimpressed (there's a very unimpressive CGI explosion to name a quick example). The thing about The Heat is that if you take each of its parts alone, from action to comedy to stereotypical-Boston-based-crime, it's hard to see the appeal. But if you take everything together it all adds up to quite an enjoyable time.

So I guess let's address this movie's influences before I get to what's unique about it. The most obvious and perhaps most poorly recreated is the influence it takes from the Boston crime drama, a genre which has been around since at least the 70's but has recently come into popularity with the production of The Boondock Saints, The Departed, and most of Ben Affleck's movies. Melissa McCarthy's character Mullins is bound up in the cliche of the local Boston cop out of touch with their feelings, and the movie felt obligated to throw in a joke about Boston accents. This was probably the biggest disappointment about the movie for me, but then again I don't even like it when Ben Affleck does it.

Where this movie really shines is its reinvention of the buddy cop film. It relies heavily on clichés like the good cop-bad cop routine, the we-finally-learned-to-get-along montage, and even the two characters' personalities (Bullock is uptight & by-the-book whereas McCarthy plays by her own rules). Yet somehow the casting of Sandra Bullock and Melissa McCarthy and the excellent writing of Katie Dippold (best known perhaps for her work on Parks & Rec) make The Heat into something much more than its predecessors. The film certainly isn't covert about its feminist leanings and brings up more than once the "problem" of women in the workforce, but despite its lack of subtlety I felt that The Heat was extremely successful.

Final Notes:
- There's an entry for The Heat 2 on IMDb, but Sandra Bullock appears to have denied wanted to participate. As for my opinion on the matter, I tend to dislike unplanned sequels as more often than not they're driven by the desire for more money than by an overabundance of inspiration. On the other hand, IMDb has Kattie Dippold returning as the writer for The Heat 2, so maybe it wouldn't be awful.
- "What is this, Training Day?"
- Buster Bluth tries to solicit a prostitute.