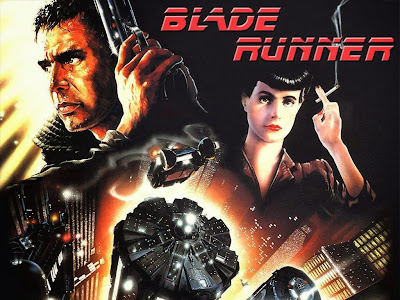 I've been watching the different versions of Blade Runner and wanted to explain the major differences between them and how they change the experience of watching the movie. For those of you who weren't aware, there were many different versions of this film made for various purposes, all of which are described briefly here and many of which can be found in various collector's editions (this is the one I have). The various cuts of the film fall pretty neatly into two categories based on three major alterations which were made for the two most recently released versions: the removal of the voice-over narration, the addition of Deckard's unicorn dream, and the removal of the studio-imposed happy ending. These three things drastically change both the experience of watching the film as well as the film's overall meaning.

The most obvious change in the two more recent cuts of Blade Runner is the removal of the voice-over narration. This one thing changes the experience of watching the movie entirely. I don't want to claim as Robert McKee does in Adaptation that all voice-over narration is sloppy writing since it has definitely enhanced some films, but it is also an easy crutch to fall back on to get some things across which may be difficult to explain diegetically. The interesting thing about the Blade Runner voice over, however, is that it's used to explain things which just happened on screen but which inattentive viewers may not have picked up on. Blade Runner isn't the easiest movie to follow if you're tired or not particularly drawn in by the stunning visuals, so for some people the narration may enhance the movie by explaining somewhat subtle things (e.g. Deckard quit being a blade runner because he was tired of killing). But the narration also dampens the mood of the film, and considering it plays over some of the most beautiful shots, many viewers (myself included) will likely prefer the voice over removed.

Whereas the voice-over narration is a pretty huge modification since it alters the form of the film as well as its content, the next two changes are simply scenes which were added or removed. Despite that, however, they both significantly reshape the meaning of the film. First we have the famous unicorn dream. By itself this sequence means almost nothing, instead serving as an intimate glimpse into Deckard's mind. The crucial moment comes at the end of the film when Gaff (a fellow blade runner) leaves Deckard an origami unicorn. This lets Deckard know that Gaff knows something which Deckard has never told anyone, that Deckard's most intimate dreams and memories are not his own, and that, ultimately, Deckard is a replicant. In the original cuts of the film, the unicorn Gaff leaves for Deckard simply indicates that he found Rachel but didn't kill her.

The last major change from the original cuts of the film is the studio-imposed happy ending. After Deckard finds Rachel alive, the two of them escape to somewhere in the north and live happily ever after. Deckard isn't a replicant and there's a voice over explaining that Rachel was made to live longer than the other replicants, so it's not a totally unfeasible ending. On the other hand, of course, it seems to miss the point of the movie. Everything previous to this has been dark and moody, and there are strong thematic overtones concerning life and death. The movie is about coming to terms with the finite nature of life (human or replicant), and to simply give Deckard and Rachel this fairy tale ending where they basically live forever just doesn't make sense to me. I could see an argument that they've learned their lesson and are going to the north to live their lives to the fullest or whatever, but it just doesn't seem to fit as well as the somewhat ambiguous ending of the more recent cuts.

Which versions do you like better? If it makes a difference, Warner Bros. had more influence over the earlier versions (the ones with voice-over narration and a happy ending but without the unicorn dream) whereas Ridley Scott had more influence for the more recent ones (no narration or happy ending, yes unicorn dream). I don't think either category is objectively better than the other, although my personal preference is probably pretty obvious. I'm just glad to have any version of this rich and beautiful movie.

Final Notes:
- Ridley Scott was the first choice to direct Dune before it was eventually picked up and adapted with questionable fidelity by David Lynch. After the death of his younger brother he decided instead to go with the smaller and darker sci-fi film-noir which was originally titled Dangerous Days and eventually became known as Blade Runner.
- Scott filmed Blade Runner after the success of his debut feature Alien and says in DVD commentary that he imagined that the world of Blade Runner is something like what the crew of the Nostromo would have come from and would be looking forward to returning to.
- While looking for a poster to headline this article I found a ton of really great ones both official and fan-made, so if you enjoy those kinds of things definitely go check it out.
analysis Blade Runner comparison cuts Deckard differences director's dream ending explained film final international movie narration replicant unicorn us theatrical versions voice over