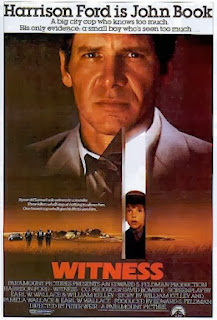 As someone who grew up with Han Solo and Indiana Jones, there's a soft spot in my heart for Harrison Ford. A few months ago, I ran around the internet looking for more movies starring him and stumbled across the 80's police-drama-slash-crime-thriller Witness (for those of you looking for the same, check out Francis Ford Coppola's The Conversation, it's the youngest I've seen Ford in a relatively big role and it's just a fantastic film). I finally got a chance to watch the movie, and while there's not really anything wrong with it, it's also not the most amazing movie you'll ever see.

By today's standards I'd compare this to something like Now You See Me in that it has the sort of Thriller Of The Month formula written over it. It puts a unique spin on the genre by interweaving Amish culture into the plot—the central murder is witnessed by an Amish boy, and Ford must lay low with the Amish after discovering the deed was an inside job—but this innovation slows down the pace of the film and divides the tone of the film harshly into the two extremes of tense police procedural and heartwarming personal journey. Both halves have their pros and cons, and their combination works well sometimes while feeling forced elsewhere. The acting is great all around, the soundtrack reminded me distinctly of Blade Runner, and there are some great landscape shots, but none of it is really enough to make this movie stand out for me.

The film's message is also pretty average. Witness is clearly a movie about the Amish in that they're heavily featured in its narrative, but on the other hand it doesn't really have anything to say specifically about Amish culture. There's a solid contrast set up between the progress and technology of the face paced city and the ritual and comfort of the laid-back Amish folk, but nothing's really done with this contrast. There's a love story between Harrison Ford and Kelly McGillis which touches on Amish culture, but this is then compared to the police to make the point that over-adherence to any set of rules is foolish. The film's climactic encounter also plays off the power of greed against the power of community, but again this theme isn't developed anywhere else in the film. Overall Witness shows a lot of promise and definitely has more good moments than bad ones, but in the end it isn't enough to raise itself out of the realm of mediocrity.

Final Notes:
- I'm glad I didn't see this as a child because I think it would have been hard for me to understand that my first crush was Amish and was in love with both Maverick and Han Solo.
- This is Viggo Mortensen's first acting role in a feature film.
- Also starring That Guy From Die Hard.