The Art of Madness in The Darkness Within 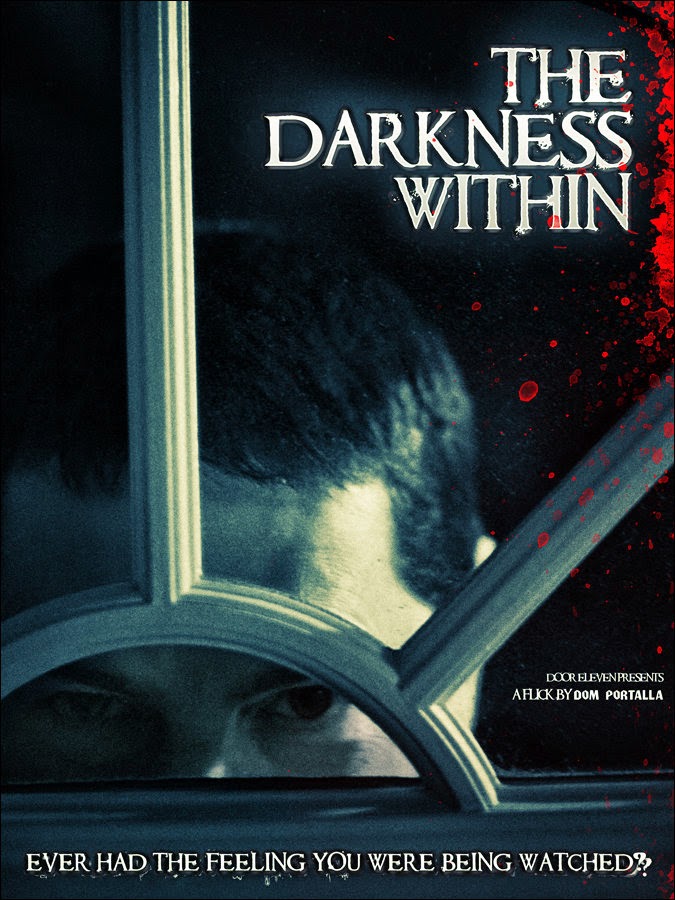 The Darkness Within is a microbudget Hitchcockian psychological thriller from independent filmmaker Dom Portalla, and it's a perfect example of how to do everything right with no money. In spite of its limitations, the film manages to not only establish its own sense of style, but more importantly it builds and maintains a high level of suspense.

Chad (Jimmy Scanlon) and Ashley (Michelle Romano) move into their new house with high hopes, and while the place clearly needs some work, the young couple is willing to try as long as it means being together. But the one thing Chad can't cope with is their neighbor, Mr. Reed. After catching him peering in through their bathroom window, Chad takes the matter to the police. He just can't stand being watched. Meanwhile, Chad spends more and more time escaping his problems by hanging out upstairs with his delinquent landlord and her sometimes-boyfriend. But as his frustrations continue to pile up, the reemergence of one of Ashley's old lovers threatens to finally push Chad over the edge into madness.

Let's talk about suspense for a minute, because it's one of the essential ingredients in thrillers like this and is something which much of the genre has forgotten how to do properly. There are several different ways to create suspense. The popular one these days is to play the "it's quiet... too quiet" game before jumping out with a quick cut and a loud noise. This is effective for fleeting moments of fright, but does comparatively little within its nanosecond of screen time and does nothing significant beyond its brief term of service. The real way to get audiences crawling in their seats is not to hide a surprise and then have it jump out, but to reveal it openly. The trick is in who you show it to.

Alfred Hitchcock has a wonderful quote about suspense:


We are now having a very innocent little chat. Let's suppose that there is a bomb underneath this table between us. Nothing happens, and then all of a sudden, "Boom!" There is an explosion. The public is surprised, but prior to this surprise, it has seen an absolutely ordinary scene, of no special consequence. Now, let us take a suspense situation. The bomb is underneath the table and the public knows it... The public is aware the bomb is going to explode at one o'clock and there is a clock in the decor. The public can see that it is a quarter to one. In these conditions, the same innocuous conversation becomes fascinating because the public is participating in the scene. The audience is longing to warn the characters on the screen: "You shouldn't be talking about such trivial matters. There is a bomb beneath you and it is about to explode!"

The key with suspense is to get the audience to participate emotionally in the action on screen. Portalla does this two ways. First, he shows the characters something scary and has them tell the audience about it, but doesn't show the audience what it is. There's a scene early on in the film where Ashley discovers a huge, gigantic, super-enormous spider in the shower and screams for Chad's help. But while the couple freaks out about this hideous monstrosity, the camera shoots from only two angles, both of which keep the creature out of sight. The audience is thereby forced to play the tug-of-war between curiosity to see what the characters are screaming about and fear at what it might really be.


The second way he creates suspense is by showing the audience something scary but not showing the characters. The first time we see Mr. Reed as a Peeping Tom, the camera simply cuts to a new angle of Chad in the bathroom where the audience can see out the window—and Reed is looking in. The audience is suddenly forced to deal with the fact that Chad is being spied on, but both Chad and the viewers are helpless to do anything. Both of these methods creates a palpable tension which lasts for entire scenes by engaging the audience in the events of the film.

Of course another crucial ingredient in suspense thrillers is successful character building. After all, what do we care if Chad is in danger if he's just some random schmo? But we do care about him. We see and feel him change throughout the course of his trials in his new home. Jimmy Scanlon's Chad starts out shy and nervous, afraid of being rejected by his new life partner and afraid their new living conditions won't be enough to make them both happy. But more than anything, Chad is afraid of being watched. And as he feels the intrusive gaze of Mr. Reed increasingly interrupting his lifestyle, Chad starts to lose his grip on reality. We see him begin to lose control. His growing madness consumes him as he spends more time away from Ashley and their new life together and as Scanlon's performance becomes more physical and violent. Then, just as the cracks in Chad's mind become wider and everything builds to a psychological climax—

I'm sorry, I can't tell you what comes next. It's just too deliciously twisted to spoil. What I can tell you is that Dom Portalla really knows what he's doing both behind the camera and in the editing room. As I already mentioned in terms of the film's grasp on creating suspense, the camera angles are all carefully chosen with a mind to both style and purpose. Not only are his compositions framed in a way that presents only the necessary information and nothing else, it also does so with an artistic flair rarely seen in independent productions. For anyone only familiar with mainstream, big-budget blockbusters, this type of film is usually comprised entirely of unsteady handheld camerawork. And while some of this is unavoidable with such strict monetary constraints, Portalla gets creative with tripods and fisheye cameras to give the film a steadier and more composed visual aesthetic.


He also gives it a unique appearance in the way he edits it all together. His frequent use of jump cuts, which leave the shot at the same angle but let its contents jump around erratically, give the film an unsettled quality, as if—like its characters—it might fall apart at any moment. This feeling is enhanced by the tendency for the sound in these situations to continue across disparate cuts unabated, another sign that something's not right. The end result is that the movie visually mirrors the mental instability of its protagonist.

After all, Chad is very much a Jack Torrence-type character, haunted by the inhumanity of his new surroundings, and the film proudly wears these cinematic influences on its sleeve. In one scene, characters watch snippets of Night of the Living Dead, a film famous for its low budget approach to independent filmmaking; in another, Chad mentions Jaws 4, an infamous horror b-movie. Dialogue later in the film refers to characters from both The Silence of the Lambs and The Shining, two horror masterpieces. But these nods and winks never distract from the narrative, and rather serve as simple indicators of the film's coordinates within its genre.


I may as well be up front about it: I watched this film because I know the guy who made it. But that's not why I'm selling it so hard. The Darkness Within is simply an exceptional indie film, and I know there's no other way you're going to hear about it without me shouting at the top of my digital lungs. It obviously has its limitations as any film with severe budgetary restrictions would, but they don't hold the film back from being incredibly entertaining. Anyone with a taste for thrilling mysteries or psychological horror films will be able to find something to enjoy here.

For more about The Darkness Within, you can find Dom Portalla and his production company Door Eleven Productions at his website, or you can watch a trailer for the film on his YouTube channel.
analysis cinematography Dom Portalla editing film Halloween Hitchcock horror influences low budget marathon movie mystery October review suspense tension The Darkness Within thriller