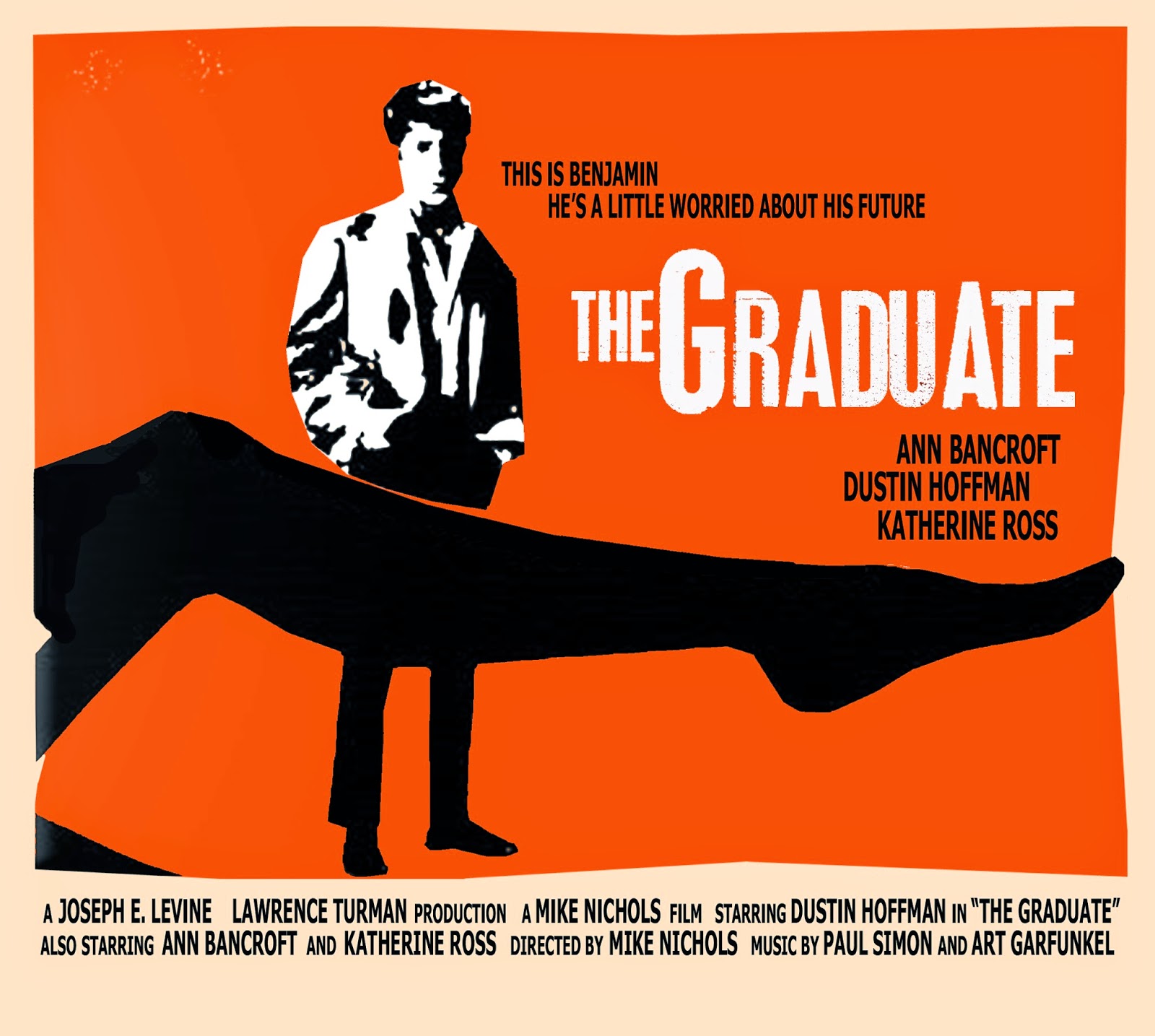 "It's like I was playing some kind of game, but the rules don't make any sense to me. They're being made up by all the wrong people. I mean no one makes them up. They seem to make themselves up."

The Graduate was so much weirder than I expected, and I don't mean because of all the sex stuff. It was weird in the best way possible. I (wrongly) assumed it would be a fairly traditional coming-of-age comedy. This is not the case at all—and not merely because it's exceptionally well built. The weirdest thing about The Graduate is the way it smuggles in satirical social commentary where you least expect it.

Straight from the beginning of the film we can tell there's something not quite right with Ben Braddock (played by a perfectly neurotic Dustin Hoffman). We're introduced to him as he's being pulled along by a moving sidewalk, arriving home from college. Simon and Garfunkel's "The Sound of Silence" plays over the scene, creating a sense of atmospheric dissonance. Coming home is supposed to be a happy time, but Ben is not smiling and this is anything but a happy song.

Garfunkel interprets the song as being about "the inability of people to communicate with each other, not particularly internationally but especially emotionally, so what you see around you are people unable to love each other." In this sense, it functions as the central thematic core of the film.

Ben begins the story emotionally vacant, with those around him struggling to make him care about something. His parents pull him toward Elaine Robinson and toward getting a job or going to graduate school; but most notably, Mrs. Robinson pulls him toward herself. He has a series of emotionless sexual encounters with her (brilliantly edited together with seamless match cuts), and again "The Sound of Silence" plays over Ben's vacant stare. Even as he slowly begins to come out of his shell it's always clear that there's some distance between his internal self and his external expression. He is the epitome of that alienated contemporary subject chased at length by the writing of Paul Thomas Anderson, Terrence Malick, Krzysztof Kieślowski, and even Wes Anderson. That's what the infamous ending is all about.

Why is he like this? As Ben tells us himself, he's "worried about the future". He alternates drastically between doing nothing at all (floating in the pool, drifting between affairs) and jumping head-on without knowing where he might land (asking Elaine to marry him). He's afraid of the future, so he alternates between hiding from it and running full-tilt toward it. He's a product of his environment, and though him the film criticizes our cultural tendency to push our young people toward an indeterminate future (everyone around Ben constantly asks him if he's “thought about his future”; even his purposefully vague identification as a “graduate” aligns him with this brand of social futurism) without helping them deal with their present, with their struggle to figure out their own identity.

The great thing about The Graduate is that none of this plays explicitly on the surface of the film. The fact that it can (and did on its initial release) come off as a mainstream comedy is part of its brilliance. I definitely didn't understand what was going on until after the credits rolled, and spent most of the movie confused about why the music and atmosphere played in such stark contrast to the events on screen. There's a lot to take in on a first watch, especially if you go in as blind as I did. It's not (only) a standard—albeit well crafted—coming-of-age narrative, but (also) a commentary on the state of modern society.