Style As Substance: Bromance in Days of Thunder 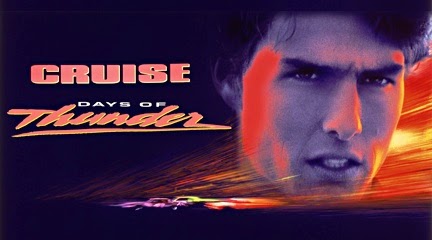 Tony Scott is the king of a very specific type of atmosphere. He takes his visuals and pushes them to the limit of what they can convey emotionally. Need an establishing shot to set the scene? Make it sunset and amp up the color saturation and make it say something about the world we're about to enter rather than simply showing us where we are. Lay down a slick 80's soundtrack underneath and you've got Tony Scott. His brother may have made more memorable individual films, but for my money Tony's the one with the stronger voice. There's lots of plotty, expository nonsense ("Those tires are match-perfect!"), and the characters are painted with the broadest possible strokes, but this is a sign that he just needs to work with better writers (see what happens when he works with Quentin Tarantino?).

But the highlight of any Tony Scott film, of course, is the bromance. Top Gun was so thick with it that we get stuff like the abundance of trailer recuts on YouTube and Tarantino's rant in Sleep with Me, and Days of Thunder follows the same blueprint. Initially Tom Cruise and Michael Rooker are violent rivals, but over time they develop an appreciation for each other's talents and become close friends. There's a strange subplot where Cruise's car "feels all wrong" after he has a disagreement with Rooker, and then this tension is resolved when Rooker tells Cruise to "drive my car"—the men are so close that they want to be inside each other's personal space. You can easily read this as a subtextual homoeroticism, but I think it's much more interesting to look at it as an exploration of the inherently sexual/libidinal nature of rivalry (examined in a different way by Rush).

In the interest of full disclosure I have to admit that Top Gun is one of my favorite movies of all time, and this is basically the same thing just with race cars instead of airplanes. But despite an entire childhood spent watching Maverick chase down MiG-28s, I don't think I ever quite realized how overtly melodramatic Tony Scott's films are. One of the symptoms of his ability to push his visuals so far is that everything can feel slightly overblown or out of proportion. When things are happy, they're happiest things ever; when they're sad, they're the saddest. The has everything to do with the way his style affects his substance. Consider the way he shoots his sex scenes: characters are little more than silhouettes with harsh back-lights tracing the outline of their bodies, every color but blue is completely flushed out, and some variety of slow love song plays on the soundtrack. It's definitely an extreme method for setting mood and creating atmosphere (reminiscent of Nicolas Winding Refn), but it's consistent and effective, and I think secretly it might be my favorite thing about Days of Thunder.