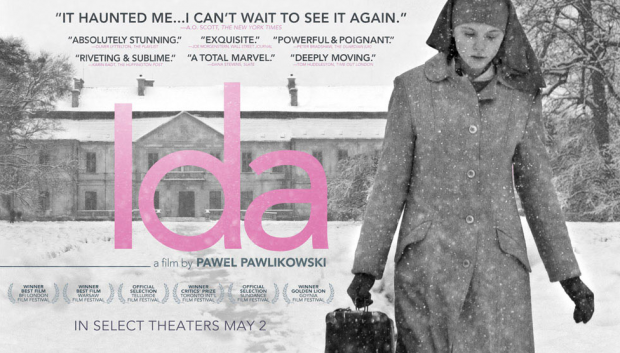 Ida is one of this year's Oscar nominees for Best Foreign Language Film, and the only one of the five to be nominated in a second category (Best Cinematography). It is about a young Nun in post-WWII Poland who leaves her monastery in order to learn about her family from her only living relative, her aunt Wanda. Wanda was a prosecutor during the Russian puppet government, and together the two women investigate their dark pasts in an artistic commentary on the restrictive confines of Catholicism and the residual trauma of the Holocaust. Most importantly for the following analysis, the film is structured around a central visual conceit, and as such it will likely split audiences into those that find it enhances the experience of the film and those that find it distracting.

Ida The Film uses its cinematography and framing to present Ida The Character's preoccupation with religion*. The film is shot in 1.33:1 full screen aspect ratio, creating a taller and thinner image which often leaves a large amount of negative space above Ida's head. This space symbolizes the presence of God: the picture leaves room for Him within the frame. Ida's life revolves around her faith, and the film mirrors this in its visual presentation by giving away a proportional amount of space to it. 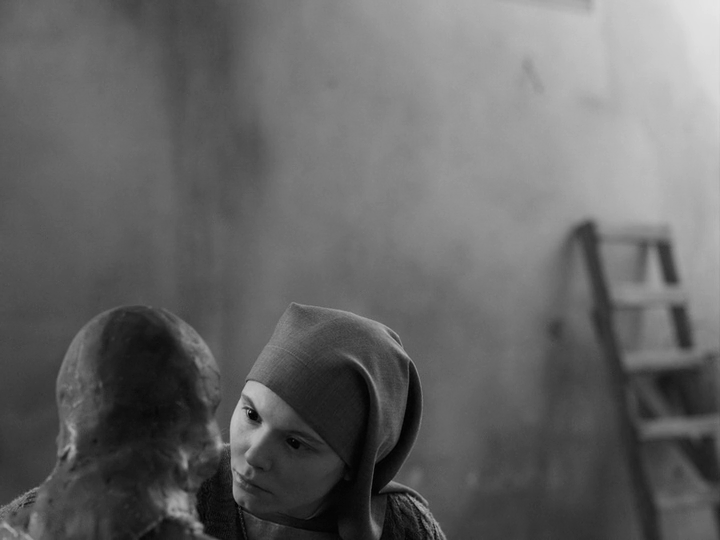 The film also uses this space to express both Ida's psychological state and the influence of her religion on her life. In a scene where she sits alone with a boy who finds her attractive, this empty expanse looming above her is exponentially magnified, as if it is weighing on her and preventing her from acting or feeling, pushing her down out of the bottom of the screen. The space is so vast that it begins to marginalize Ida within her own story. Her identity and agency begin to evaporate under the immense pressure of religious doctrine. 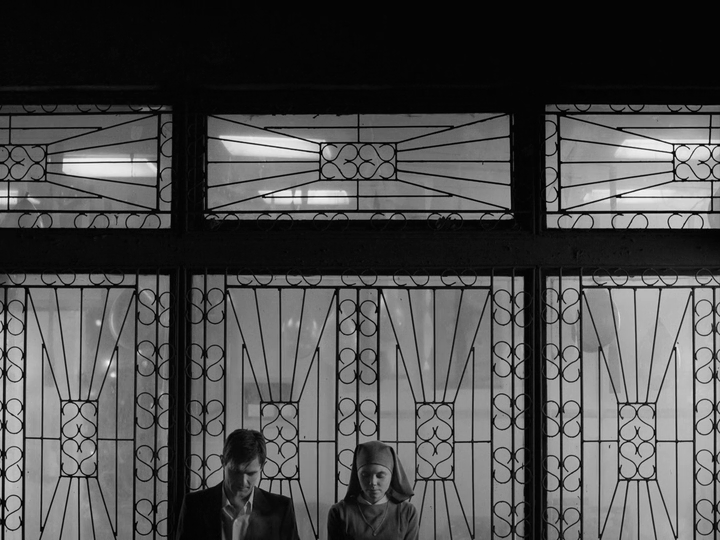 These images become a point of contrast when other people occupy the screen. When Ida first travels into the city, she looks at the world around her and sees it with an equal space above and below. This shifted perspective signifies the presence not only of God but also of the Devil, the influence each of virtue and sin (it's no coincidence that there is a couple kissing in public in the background of the shot below). This is how Ida sees the world, as torn between its own good and evil instincts; the twist that she doesn't initially realize is that while the outside world is corrupted by its fall from grace, it is at least framed in the center of its own story. It may be immoral, but it is the agent of its own immorality. 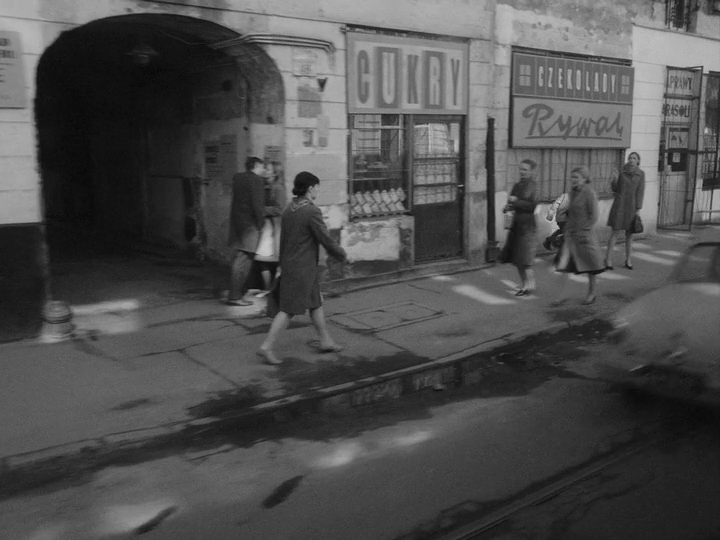 The visual structure of the film becomes most interesting in moments of conflict. When Ida meets the man who caused her family immeasurable amounts of grief, this space above her head is still there but it is blocked off, interrupted, as if she wants to be in touch with God (to forgive this awful man) but she's held back by unseen forces (her anger). Later, when she visits her parents' grave, we get the most jarring divergence from this visual structure: Ida is shot from the shoulders down. The presence of God has been so quickly evacuated from the image that some of Ida has disappeared with it. Not only has God been violated, but Ida's belief—and therefore her identity—have been shaken, externalizing her internal conflict through the style of the image. 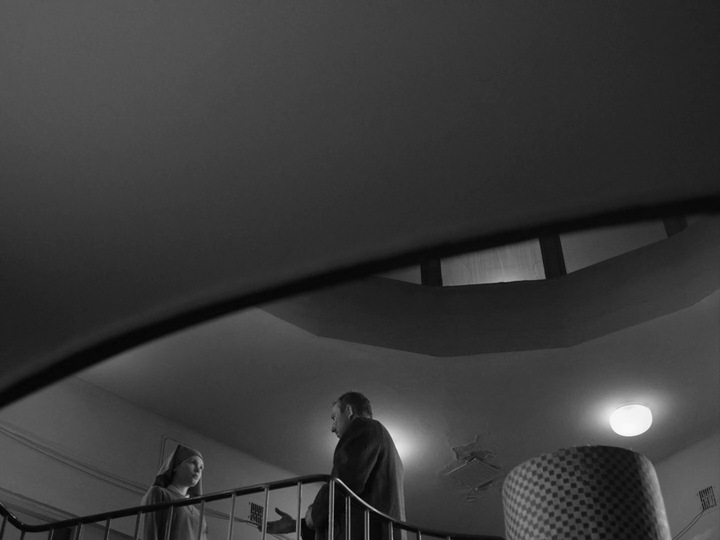 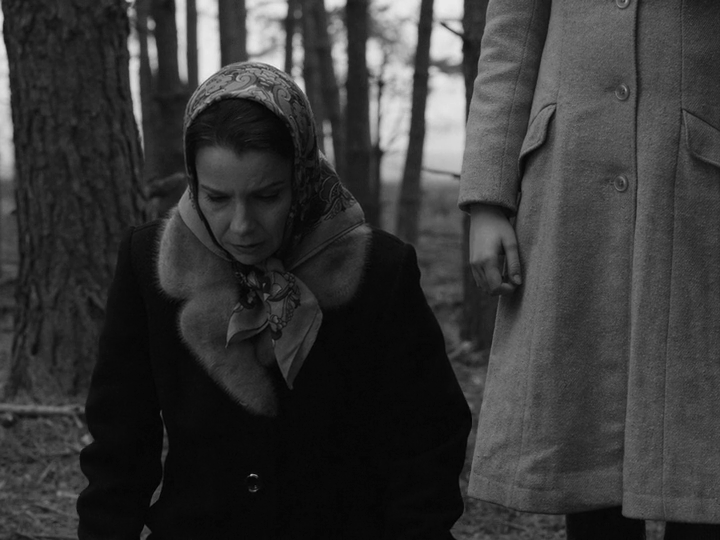 Although this structural formalism provides magnificent insight into the way Ida's identity and agency are structured around her religious beliefs, the same comprehension is not offered of her emotions. Agata Trzebuchowska plays Ida as a blank slate, always at a distance from the audience. The man she meets says she has an immediate effect on people, and this is translated well to the screen: she's absolutely stunning in black and white, and the camera seems capable of lingering indefinitely on her innocent face and dark eyes (they seem to contain the entire universe). But the man is also right when he says that she has no idea of this effect, and this lack of self-perception is mirrored in her lack of emotional connection.

While this accurately reflects Ida's character, it also leaves her impenetrably dense even in moments of crisis. When she's faced with overwhelming tragedy, all we see are the actions she takes, not the thoughts or feelings which led to them. In the first two-thirds of the film, this emotional distance effectively makes the point that religion distances us from ourselves; but it continues beyond this point into the scenes where we need an emotional connection to understand Ida's reaction to the misfortunes she faces. There's a certain crucial turning point which never effectively turns her character. While her detachment leaves her ambiguous and open to interpretation, it also interrupts the film's thematic clarity.


Ida is a beautiful and technically fascinating film, and it's certainly one of the most impressive films I've seen from either 2013 (when it was released in Poland) or 2014 (when it was released in the States). I feel that the austerity of the first half doesn't fit after the crisis that leads to the second, but this is far from ruining the rest of the film's achievements, and I'm glad the Oscars have brought a wider audience to this great film.

*Since writing this review, I have come across a similar interpretation that reads the negative space around Ida as the weight not of Religion, but of History (the specter of World War II haunts the image).

"Do you have sinful thoughts sometimes?"
"Yes."
"About carnal love?"
"No."
"That's a shame. You should try, otherwise what sort of sacrifice are these vows of yours?"