The Beyond: Surreal Gore & Symbolic Instability 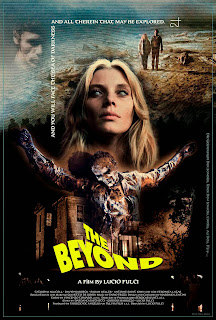 So, maybe building a hotel on top of a portal to the underworld wasn't such a good idea.

This is Lucio Fulci we're talking about here, so the gore is absolutely off-the-walls bonkers. People's bones appear to be made of no more than marshmallows, and their heads have a bad habit of turning into plaster molds in between shots. But far from ruining the film, this plays into the surreal experience it offers. Like all great horror, this is a story about the fragility of our social fabric and what happens when our symbolic network begins to disintegrate (we all turn into plaster marshmallow zombies).

Personally I had trouble connecting to the film, although not due to any fault of the wonderful Catroina MacColl, our guide through the story. What frustrated me was the way the narrative arc denies moral agency to its characters (i.e. it's not their fault the zombies are summoned). Some people did some bad stuff in the past, so the people in the present are punished because... well, because we want to see some gory special effects.

For an archetypal "haunted house" movie you can't get much better than this, but as a story in its own right it didn't do much for me. Ultimately still worth watching though, especially since horror & zombie aficionados might get more out of it than I did. Mostly memorable for the moments that got me to write stuff in my notes like "The Beyond goop is beyond goopy, but it's also goop from the beyond."