The Hero's (Puppet) Journey in The Dark Crystal 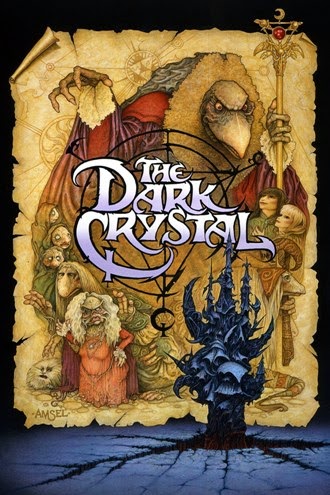 The Dark Crystal is a fantasy adventure film directed by Kermit the Frog and Yoda, a simple fact which never ceases to amaze me (and an image which never ceases to make me chuckle). It goes without saying that the puppetry is absolutely astonishing (truly giving life to inanimate objects), and along with the incredible production design and special effects the whole thing looks quite lovely (especially in 35mm on the big screen).

What I love about The Dark Crystal (the reason I went to a special screening at noon on a Saturday beyond simply wanting to see what it looked like) is the way it depicts the synthesis of good and evil, the fact that they're two sides of the same coin. When the Crystal cracked, both Mystics and Skeksis were born together; while they're alive, their bodies are linked (the injury or death of one means the same of the other); when the Crystal is restored, they disappear together. We cannot rid the world of pure evil without also ridding it of pure good, leaving in its place something a bit more mixed (Jen is heroic but also hesitant, fearful).

"A thousand years ago, this land was green and good—until the Crystal cracked. For a single piece was lost; a shard of the Crystal. Then strife began, and two new races appeared: the cruel Skeksis, the gentle Mystics."

I enjoy high fantasy in general (although I don't seek it out the same way I do anything with spaceships or aliens), but the story here is a little too boilerplate for me. It's The Hero's Journey and not much else, and with a hero that doesn't impress nearly as much as the supporting players (even his female companion has a stronger presence) there's little to latch onto in terms of story. But while there's not enough in the foreground to make the experience completely fulfilling for me, the background is immensely detailed creates a unique and immersive world. Worth seeing at least once, and definitely recommended for fantasy fans.

"Hold her to you, for she is part of you, as we all are part of each other."